He reproaches him for having appointed a campaign committee instead of a crisis cabinet and is ironic about the "casting" of the act in Moncloa. 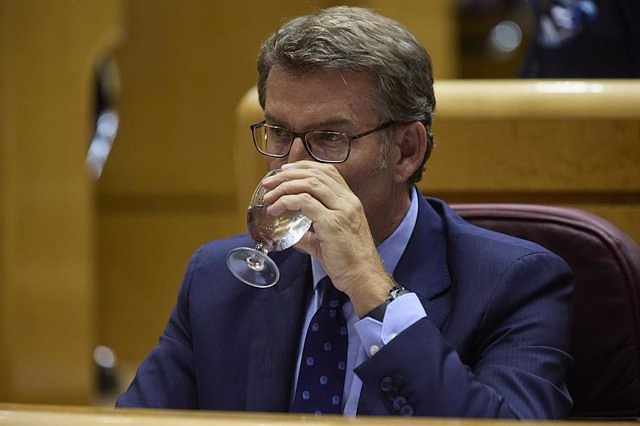 The leader of the PP, Alberto Núñez Feijóo, has offered the President of the Government, Pedro Sánchez, the support of his formation to complete the mandate of this legislature if he is able to break with United We Can, dismissing the ministers of this formation, and their parliamentary partners, such as ERC or Bildu.

This has been transferred during his speech in the plenary session of the Senate after the appearance of the Chief Executive to analyze the energy situation, where he has reproached him for acting so far with improvisation and attending only to "demographic" doubts before the next elections.

In this way, Feijóo has warned that Spain does not deserve a "volatile", "oversized" and "subdued" government, for which he has urged it to "break with its allies", dismiss the ministers that "it has not appointed" ( in reference to the portfolios of United We Can) and those headlines that "are not up to the critical moment in Spain".

"Look for support in the party that embodies the alternative," Feijóo has demanded of the president to emphasize that his offer does not bring confusion, given that the PP will "never" be his "permanent ally", but it will always be Spain's.

Moreover, the opposition leader has proclaimed that Spain is the target and has confronted Sánchez by saying that the "main difference" between the two is that the president "will never be willing to wear himself out in the time he has left in government" , while he is willing to do it "in the place where the citizens put him".

During his speech, Feijóo has harshly charged against the management of Sánchez and his Government, who dedicate themselves to insulting him when he defends his program calling him "ignorant", "catastrophist" or "trumpist", but then adopts measures that the PP proposes as lower VAT to light or the announcement of approving an exception for cogeneration facilities of large consumption industries, so that they are temporarily covered by the Iberian mechanism.

"Today it is the media's turn to insult," he proclaimed after the president's first speech, to contrast the "aggressiveness" he professes with the "docility" he shows, in his opinion, before his allies. "Today we know that with Podemos you can sleep peacefully, but I wonder: with Bildu too?" Feijóo deepened.

It has also been questioned whether "there is no one with the authority to stop the messes" of the coalition Executive, characterized by management swerves due to improvisation, lack of resources or "surveys".

"CAMPAIGN COMMITTEE" INSTEAD OF "CRISIS CABINET"

What's more, he has criticized that instead of creating a crisis cabinet for the energy crisis, he has chosen to set up the "Ferraz campaign committee" in the Executive, which is "revealing" of the president's situation, although Spain cannot be at the expense of its "demographic doubts".

In addition, the leader of the PP has released Sánchez who does "strange things" and now says that he wants to "open Moncloa". At this point, he has challenged Sánchez to dare to "talk to citizens without prior casting", as in his opinion he did yesterday in an act to mark the opening of the political course with fifty citizens and that the PP Previously, he called it a "little theater" as there were supporters of the PSOE among the attendees.

"NO IS NO" IS SÁNCHEZ'S "ONLY IMMUTABLE PRINCIPLE"

On the other hand, he has demanded that Sánchez stop governing with ideological "prejudices" in energy matters and attend to the offer he offers to create a new energy model, instead of assuming the current challenges in a "rushed" way.

However, he has been skeptical that he will accept his agreement proposal, given that he has rejected all the proposals of previous pacts, and has snapped at Sánchez that "no is no" is the "only immutable principle" in his political career at against the PSOE.

‹ ›
Keywords:
BilduFeijóoPedro SánchezERCPodemosPP
Your comment has been forwarded to the administrator for approval.×
Warning! Will constitute a criminal offense, illegal, threatening, offensive, insulting and swearing, derogatory, defamatory, vulgar, pornographic, indecent, personality rights, damaging or similar nature in the nature of all kinds of financial content, legal, criminal and administrative responsibility for the content of the sender member / members are belong.
Related News