Among those that he wants to abolish are: the 'only yes is yes' law, abortion, Trans law, euthanasia, 'Celaá law, sedition or Democratic Memory. 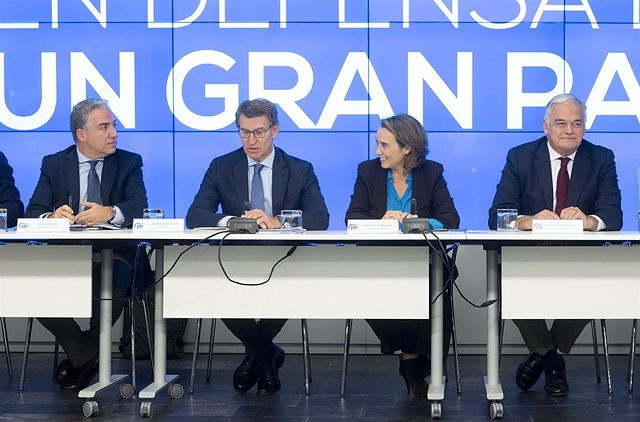 Among those that he wants to abolish are: the 'only yes is yes' law, abortion, Trans law, euthanasia, 'Celaá law, sedition or Democratic Memory

The leader of the PP, Alberto Núñez Feijóo, has set himself the objective of repealing almost a dozen laws of the Government led by Pedro Sánchez, most of them with a social nature such as the one that regulates euthanasia, the education law (better known as the 'Law Celáa'), and others that are still in the parliamentary process, including the so-called 'only yes is yes' law, the abortion law or the Trans law, the latter three with the stamp of Podemos.

Added to this package is the reform of the Penal Code that eliminates the crime of sedition or the Democratic Memory Law, which came into force last October, and which the first opposition party harshly criticized for having agreed between the PSOE and Bildu and extend until the end of 1983 the recognition of victims of human rights violations. The 'popular' consider that this "questions" the Transition and "rewrites history".

Apart from these regulations, there are many others that the PP intends to reform in depth if they are approved in their current terms, such as the new Official Secrets Law that reforms the current one from 1968 or the Animal Welfare Law. In addition, the 'popular' promised to change Sánchez's labor reform, betting on more flexibility and modernization "and to introduce the so-called 'Austrian backpack' (a fund that the worker accumulates and that he would take with him in case of dismissal).

The 'popular' focus above all on the government's social laws, several of them signed by Podemos, such as the Comprehensive Law on Sexual Freedom known as the Law of 'only yes is yes'; the law for the equality of trans people and the guarantee of LGTBI rights; or the law on Sexual and Reproductive Health and Voluntary Interruption of Pregnancy, the latter two still in parliamentary proceedings.

In the last two weeks, Feijóo has focused on the "only yes is yes" law, the entry into force of which is causing dozens of sentence reductions for sexual offenders and releases, a fact for which he has requested the urgent modification of the law. law and the resignation of the Minister of Equality, Irene Montero. The Popular Group is also working on its own bill that it will shortly present in the Lower House.

In addition, the PP is going to repeal other social norms that have been appealed before the Constitutional Court. Thus, apart from the abortion law, the party filed an appeal against the rule that regulates euthanasia on the grounds that it attacks the fundamental right to life; or the educational law, known as the 'Celaá law' because "it equals below and does not seek excellence", in the words of Feijóo.

In an economic key, the PP has also positioned itself against the law that establishes temporary taxes on energy, banking and large fortunes. Feijóo wants to repeal a good part of Sánchez's new tax proposals and has been especially critical of the so-called 'tax on the rich' which, in his opinion, is going to cause capital flight to countries like Portugal. "The goal of a country is not to end wealth, but to end poverty," he recently stressed.

The PP has also announced that if Feijóo arrives in Moncloa it will repeal the order that prohibits hunting wolves as they are included in the list of protected species. According to this formation, there is no scientific data that supports the incorporation of the wolf to that list and "great harm" is being caused to farmers for an "ideological reason."

Although the PP has not talked about repealing, there are many other regulations that it intends to reform in depth if they are approved in their current terms. Among them is the future Law on Official Secrets which, although it is parked in the Chamber, in 'Genoa' they see it as a new concession from the Government to its partners because the regional police will be able to determine what is or is not classified information.

This block also includes the Animal Welfare Law, a rule in which the PP submitted an amendment to the entirety for understanding that "it puts the animalist ideology before the welfare of all animals and people."

The government labor reform approved in February 2022 - thanks to the mistaken vote of PP deputy Alberto Casero - will be another of the rules in which there will be changes. The Popular Group already voted against it and its parliamentary spokesperson, Cuca Gamarra, already announced during the debate on that royal decree-law that his party would reform it if the government regains power and would impose "the Austrian backpack" as a financing model for the unemployment and pensions.

In an interview with Europa Press three months ago, Feijóo has already advanced that those regulations that he intends to repeal "will all appear" in his electoral program. "We have to change the educational policies. We have to change the policies of democratic memory. Neither the feminists nor the groups for which they are intended agree on the Trans Law," she said.

Feijóo was especially critical of the Democratic Memory Law. "I believe that the president of the Government of a country can never lose dignity. And the nation even less. Memory and democracy is incompatible with Bildu. 960 murders, 10,000 wounded, more than 300 unsolved murders," he said at the time.

The head of the opposition considers that now what he has to do now is explain to the Spaniards the "atypical situation" that the country is experiencing because "Spain deserves a much better government than the one it has." "Let's do pedagogy. This is not a question of changing for change's sake. This is a question of returning again to the basic consensus", he declared.