He criticizes the PSOE's vote difference with the nuclear ones and says that Podemos "certifies that the Iberian exception is paid by consumers". 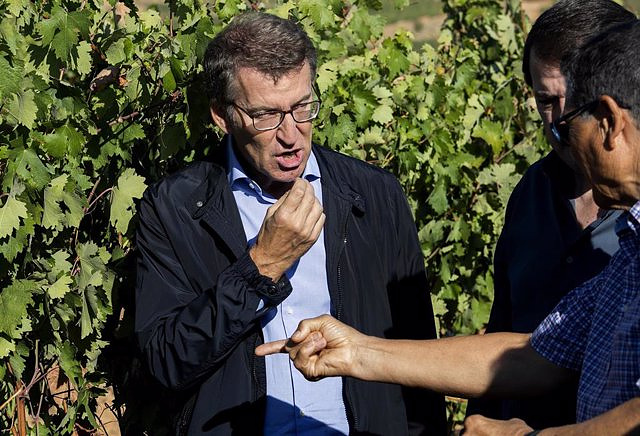 The leader of the PP, Alberto Núñez Feijóo, hopes that the third vice president and minister for the Ecological Transition, Teresa Ribera, has proposed the meeting with the person in charge of Economy of the PP, Juan Bravo, to "evaluate" the energy plan of his party with the objective of "getting it right", especially when, as he has said, he sees in the PSOE and its partners "three different energy models".

"We are going to the meeting with our proposal and our documents to try to serve our country from the alternative, which is our commitment and our objective," Feijóo declared before the meeting that Ribera and Bravo will hold this Thursday to negotiate energy measures. This meeting will take place ten days after the first opposition party submitted its energy plan to the Executive.

Feijóo, who has visited a vineyard in Roa (Burgos), accompanied by the president of the Junta de Castilla y León, Alfonso Fernández Mañueco, has recalled that with the energy document it is the sixth proposal that they transfer to the Government and has called on the Executive to "copy "the set of economic and energy proposals of the PP, as it has done with the reduction of VAT on electricity and gas.

"I suppose that (Thursday's meeting) will be for the Government to evaluate the proposals that it has had available for weeks, with the aim of getting it right", he added, to underline that the PP's proposals do not carry the party's logo but that go with the coat of arms of Spain so that the Government makes them its own.

At this point, he stressed that what the PP wants is for it to "get it right" in terms of energy, at a time when "the primary aluminum industry has been closed", the "steel industry" points to an ERE "to its 8,000 workers throughout the year 2023 and "the iron industry has many limitations".

In addition, Feijóo has assured that the PP wants to know in that meeting with Ribera "if the PSOE has any energy proposal", given that, as he has said, "in just one week" they have seen "three different energy models".

At this point, he highlighted the fact that the vice president herself this Monday has "accepted" the energy proposal that Galicia had made two years ago so as not to close the As pontes thermal power plant and "keep 50%" of it active, "Given the need to resort to this plant when wind and photovoltaic energy do not respond to market demand".

The leader of the PP has also recalled that a few days ago the PSOE in the Assembly of the Junta de Extremadura voted in favor of the maintenance and extension of the nuclear power plant installed in that region, while the PSOE in Madrid was against it.

"The PSOE of Extremadura votes in favor of extending the useful life of nuclear power plants and the PSOE in Madrid against; We can confirm that the Iberian exception is paid by consumers, the Government denies it; and finally, for so long to say that the thermal power plants had to be closed, yesterday the third vice president accepted that half of that thermal power plant remain active", he stressed.

‹ ›
Keywords:
FeijóoPSOEPPTeresa Ribera
Your comment has been forwarded to the administrator for approval.×
Warning! Will constitute a criminal offense, illegal, threatening, offensive, insulting and swearing, derogatory, defamatory, vulgar, pornographic, indecent, personality rights, damaging or similar nature in the nature of all kinds of financial content, legal, criminal and administrative responsibility for the content of the sender member / members are belong.
Related News