Feijóo charges Sánchez for the 'only yes is yes' law: "It is not a government of the people but against the people"

Gamarra criticizes that the Executive went ahead with this law despite the warnings of the CGPJ and jurists: "We demand responsibilities". 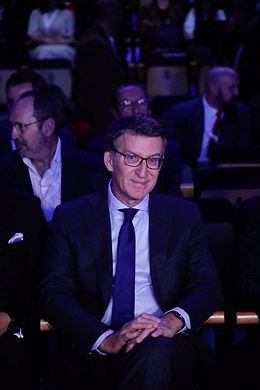 Gamarra criticizes that the Executive went ahead with this law despite the warnings of the CGPJ and jurists: "We demand responsibilities"

The leader of the PP, Alberto Núñez Feijóo, has charged harshly against the Government of Pedro Sánchez for approving the Law on Sexual Freedom, known as the 'only yes is yes' law, despite the "warnings" that came to him. "It is not a government of the people but against the people", he has proclaimed.

This has been pronounced by Feijóo after the application of this norm several courts have lowered the sentences imposed on several convicted of sexual crimes. The PP has already presented a motion in the Senate, which will be addressed in plenary session next week, to force the Government to "immediately review" the Law on Sexual Freedom via urgency.

Apart from this norm, Feijóo has blamed Sánchez for other steps taken in the last week, such as the repeal of sedition or the intention to also change embezzlement, while not taking other measures that, in his opinion, can benefit citizens , such as "evict squatters in 24 hours" or "lower personal income tax and VAT", as requested by the PP.

Evict squatters in 24 hours no; Reform embezzlement yes. Lower VAT and income tax no; Approving the Law of the only yes is yes despite the warnings yes. Not assuming responsibility ", Feijóo has proclaimed in a message on his official Twitter account, which concludes like this:" It is not the Government of the people but against the people ".

The general secretary of the PP, Cuca Gamarra, has also attacked the Government for its "only yes is yes" law because, in her opinion, it is an "indefensible" rule. "The Government is solely responsible for leaving women unprotected, lowering sentences for sex offenders and charging judges," she stressed.

Gamarra has indicated that what is happening was warned by the General Council of the Judiciary, jurists and the Popular Party, but they went ahead "out of arrogance and ideology." "We demand responsibilities", he has demanded, in a message on the same social network.

For his part, the spokesman for the Popular Group in the Senate, Javier Maroto, has announced that the PP will take a motion to the plenary session next week for the government to review that law and rectify an irreparable error."

"How is it possible that the Government can do things in such a sloppy, negligent and arrogant way, despite all the warnings?" the "popular" spokesman asked. In his opinion, it is "a clumsiness and a blunder by Sánchez and Irene Montero."

The PP's Institutional Vice-Secretary, Esteban González Pons, has also spoken, stressing that the CGPJ warned the Government in its mandatory report that with its 'only yes is yes' law, the penalty for the crime of rape was lowered, but the Executive "ignored that warning." In his opinion, the "legal error is so big" that "it is not resolved with insults but with resignations."