Feijóo boasts of a cohesive PP in front of Sánchez, "entangled in the daily controversy" and who is "shunned" by his 'barons' 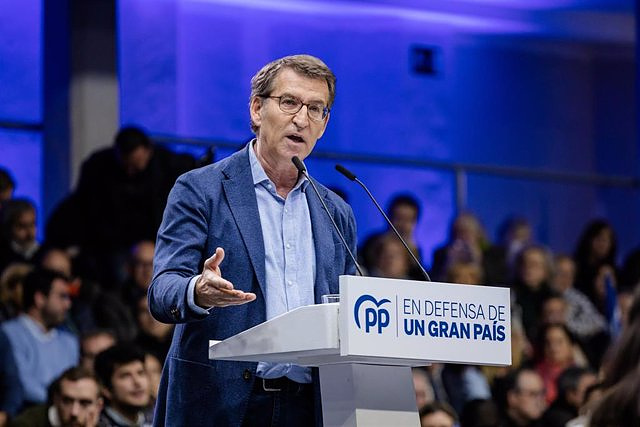 The leader of the PP, Alberto Núñez Feijóo, has boasted this Monday of a "cohesive" PP against the PSOE led by Pedro Sánchez, who leads a government that is "shunned" by its own 'barons' and is "entangled in the self-generated daily controversy ", alluding to the repeal of the crime of sedition, the possible reduction of embezzlement or the consequences of the 'only yes is yes' law.

This was pronounced at the presentation of the conference-discussion of the president of the PP of the Valencian Community, Carlos Mazón, organized by the New Economy Forum, which was also attended by several regional presidents of the PP, such as Isabel Díaz Ayuso from Madrid (who has left earlier for scheduling reasons), Alfonso Fernández Mañueco from Castilla-Leon and Fernando López Miras from Murcia. The mayoress of Madrid, José Luis Martínez-Almeida, and the spokesperson for the PP in the Valencia City Council, María José Catalá, among others, also attended.

Feijóo has stressed that in Spain there are parties in which the regional leaders "shun" the national leaders and "avoid taking a photo with them" as, according to what he said, they saw yesterday in the pact of the Socialist International where "a good part of PSOE leaders excused their attendance", alluding to the absences of Javier Lambán (Aragón) and Emiliano Garcia-Page (Castilla-La Mancha).

In addition, the president of the PP has alluded to parties "where splits occur" and "parties that are divided", where "some leaders insult some leaders and launch alternative projects", referring to the situation of Vox and Podemos, respectively.

Faced with this, he has stressed that the PP is a "cohesive party" and "with a single objective: to serve the Spanish people" while others "are more concerned with confronting each other" instead of "fixing problems." As he added, the objective of the PP is to "present an alternative to the current government" of Pedro Sánchez.

The head of the opposition has also puffed up the polls that have been published this weekend and has said that "it's not bad to start the week." In his opinion, these polls prove something "very important, that Mr. Sánchez has not won a poll that has not been signed by a PSOE militant for a long time."

‹ ›
Keywords:
FeijóoPedro SánchezPSOEPP
Your comment has been forwarded to the administrator for approval.×
Warning! Will constitute a criminal offense, illegal, threatening, offensive, insulting and swearing, derogatory, defamatory, vulgar, pornographic, indecent, personality rights, damaging or similar nature in the nature of all kinds of financial content, legal, criminal and administrative responsibility for the content of the sender member / members are belong.
Related News