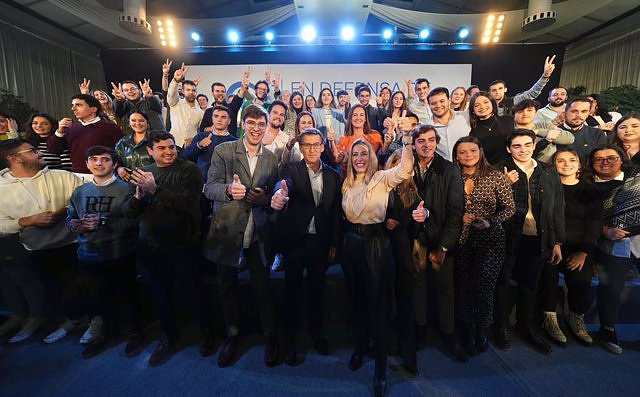 The leader of the PP, Alberto Núñez Feijóo, has accused this Thursday the head of the Executive, Pedro Sánchez, of "abdicating" his obligations as president of the Government and letting Bildu and ERC "command" in Spain, two parties to which the country "give a damn". Having said this, he has promised that if he wins the elections he will do "the opposite of what he is doing" the president of the Government.

This has been pronounced in an act in Badajoz together with the president of the PP of Extremadura, María Guardiola, the first of the PP campaign 'In defense of a great country' to "appeal to the sense of State of the deputies of the PSOE of all Spain and urge them to stop with their vote the repeal of the crime of sedition". On Saturday he will do a similar act in Madrid de Feijóo together with the Madrid president, Isabel Díaz Ayuso.

Feijóo has indicated that, although there are PSOE leaders who "do not agree with Sánchez's policy", he has "no hope" that they "will raise their voices in the face of the current excesses". "They have decided to be accomplices of Mr. Sánchez," he lamented.

"I am not resigned to the fact that neither country is governed by coalitions of radical minority parties who do not give a damn about Spaniards and on top of that make fun of the majority of Spaniards," he proclaimed.

Feijóo has affirmed that this December 6 the anniversary of the Magna Carta "will be different" because the one who "repeals the crime of attacking the unity of Spain is breaching article 2" of the Constitution, which says that "Spain is a nation unique and indissoluble".

The leader of the PP has complained that this week Sánchez did not clarify in the plenary session of the Senate if "attempting the integrity of Spain" will cease to be a crime and if "the sentences for the corrupt for embezzlement will be reduced public". "The answer must be yes or no," he has stated, adding that his "deafening silence has many more answers."

A few hours after Congress gave the budget the green light, Feijóo pointed out that Sánchez has presented "unreal" public accounts that "not even he believes." In addition, he has pointed out that the macroeconomic picture has been "denied" by organizations such as the Bank of Spain, the IMF or the European Commission. "There is no one who believes in Spain's accounts," he has proclaimed.

After assuring that the head of the Executive "no longer presides over the Government but rather a coalition of interests", he stressed that there are no measures in public accounts to help the country but to "finance" his electoral campaign.

The head of the opposition has stressed that "you cannot govern like this." "When one abdicates their obligations to the Spanish, they cease to be the President of the Government of Spain", he stated, adding that "lies, falsehood and deceit cannot be the business card of the Prime Minister of Spain" .

Regarding the law of 'only yes is yes', Feijóo has summoned the chief executive to "rectify" his law and "ask for forgiveness", so that "it restores the dignity of those women who have been withdrawn" with that rule.

Having said this, he has promised that if he wins the elections he will do "the opposite of what Mr. Sánchez is doing" because he believes in a policy with "less decibels" in which experience and management prevail over the "banner and the slogan".

‹ ›
Keywords:
BilduFeijóoPedro SánchezERCPP
Your comment has been forwarded to the administrator for approval.×
Warning! Will constitute a criminal offense, illegal, threatening, offensive, insulting and swearing, derogatory, defamatory, vulgar, pornographic, indecent, personality rights, damaging or similar nature in the nature of all kinds of financial content, legal, criminal and administrative responsibility for the content of the sender member / members are belong.
Related News