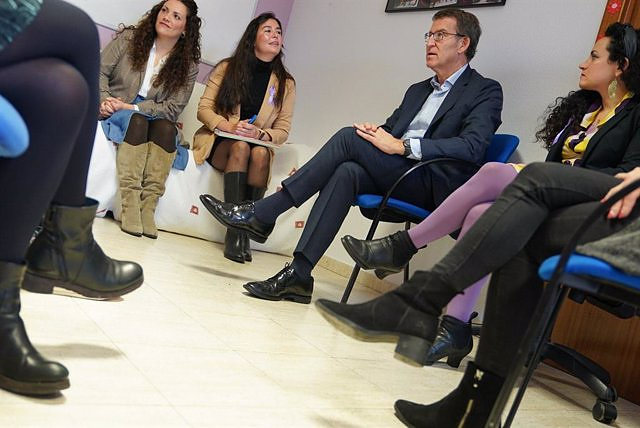 The leader of the PP, Alberto Núñez, has assured this Wednesday that we must "continue working to eradicate the scourge" of gender violence and not take "steps back due to sectarian endeavors such as the 'only yes is yes' Law". Having said this, he has once again asked the Government to recognize its "error" and modify this norm, which, in his opinion, is assuming a "great lack of protection" for the victims of this type of violence.

This is how the head of the opposition has pronounced after visiting a reception center in Madrid for women victims of gender violence and their children, accompanied by a social educator, a psychologist and a social worker.

There he has heard the testimonies of women who have suffered this scourge and of the professionals who provide comprehensive care to the victims in the reception centers in order to achieve recovery and overcome the effects of the violence suffered, as reported by the party in a statement.

Feijóo has affirmed that his work is "essential". "We must continue working to eradicate this scourge, as we have always done in the PP, and not take steps back for sectarian endeavors as with the Law only if it is yes," he stated in a message on his official Twitter account, which he has collected Europe Press.

During his visit, he underlined the unanimous rejection of the PP against this type of violence, as well as the "firm" commitment to eradicate it. In this sense, he recalled that he has always supported and led advances and initiatives against gender violence, such as the First Action Plan against Domestic Violence; the creation of the Observatory against Gender Violence; the implementation of protection orders and the consensus achieved in the State Pact against Gender Violence.

For all this, the president of the PP has once again asked the Government to recognize its "error" and modify the so-called Law of the only yes is yes, which is assuming "a great lack of protection" for the victims of this type of violence "before the avalanche of reduced sentences that are being requested by those convicted of sexual assaults," added the party.

Feijóo's visit to this reception center took place the same day that the motion presented by the PP in which the Government is urged to "immediately review, by way of urgency" of the Law on Sexual Freedom, so that those who commit sexual crimes can have "as soon as possible the same penalties that were in force until September 2022 and that have been reduced with the current regulation." The PP is also going to present a bill in Congress in similar terms.

‹ ›
Keywords:
FeijóoPPViolencia De Género
Your comment has been forwarded to the administrator for approval.×
Warning! Will constitute a criminal offense, illegal, threatening, offensive, insulting and swearing, derogatory, defamatory, vulgar, pornographic, indecent, personality rights, damaging or similar nature in the nature of all kinds of financial content, legal, criminal and administrative responsibility for the content of the sender member / members are belong.
Related News