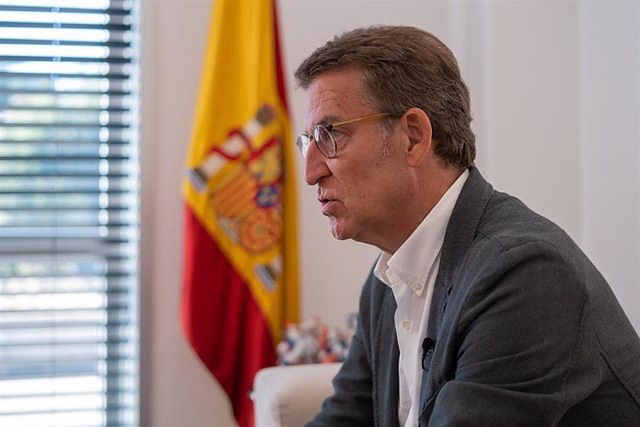 The president of the PP, Alberto Núñez Feijóo, has accused the president of the Government, Pedro Sánchez, of "exchanging checks for votes", assuring that he uses the extraordinary collection of the State for it and "not investing it so that the economy does not stop and so families can make ends meet.

"The Government is in the policy of I give a check to this group, and to this other, and maybe that way they will vote for me more. Our proposal is that citizens decide what they spend their money on and receive what they have paid more because the Government has not been able to control prices," he said in an interview published this Sunday by 'La Razón', collected by Europa Press.

In it, the leader of the PP reviews the main issues that will be addressed this Tuesday in the Senate, with the presence of both leaders. Feijóo defends that this is an opportunity for the Government to specify its proposals and the 'popular' can continue to present alternatives, such as an energy saving pact for the Spanish public sector and a money fund for companies in which energy is decisive for its future viability.

In this sense, he has detailed that the Government has collected 16,500 million euros more this semester than in the first half of the previous year, for which he adds that citizens have paid 16,500 million euros more in taxes. "Basically because we have year-on-year inflation of 9% compared to last year's inflation of over 6.5%. Spain was already close to 8% before the war. Faced with a crisis like this, this higher collection must be returned to the citizens", he defended.

In this regard, he pointed out that this extraordinary collection should have been used to help medium and low incomes and to prevent companies that are more dependent on energy from having to stop their activity, "as is happening".

"In Spain, the only primary aluminum company has already closed, and the ceramics sector in the Mediterranean is in a limit situation. The companies that are dedicated to steel or iron are in a limit situation. That is why, I insist, the money that we have collected more, we have to invest it so that the economy does not stop and so that families can make ends meet", he added.

Regarding the aid granted by the Government, Feijóo considers that the message transmitted by the PSOE is that "where it is interested, it tells citizens not to worry, that they can travel for free, while in other places, where the PSOE thinks it can obtain less electoral revenue, such as rural areas, no measure is adopted".

"The aid must be equally for all the middle and lower classes, wherever they live," he asserted.

On the other hand, Feijóo has accused Sánchez of not having as a priority objective to govern Spain, but to remain in the Government of Spain and rejects those voices that say that he intends the same.

"The Popular Party has sent five documents with proposals to the Government to respond to inflation and help families, on security, on defense, a modification of the Constitution to meet the needs of people with disabilities and an energy pact. Can more proposals be made in less time? And, above all, can there be more pride in the responses?"

Finally, he underlines that the PP has voted in favor or has abstained in the last ten Royal Decree laws, for which he does not consider that his formation has been installed in the 'no is no' and calls for questioning "why the Government can agree with everyone, and everything, except with the Popular Party".