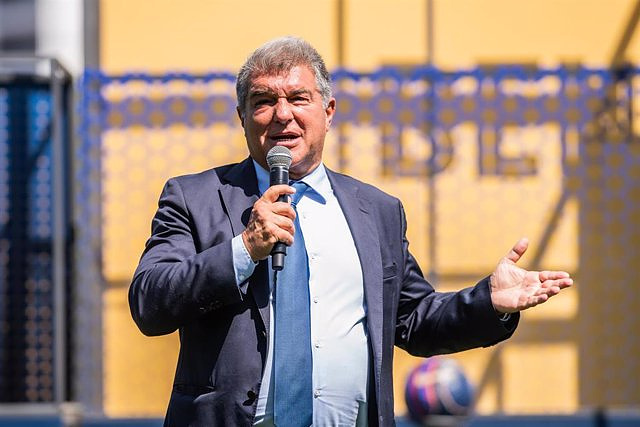 The Board of Directors of FC Barcelona approved this Monday the budget for the 2022-2023 season, which includes an operating income budget of 1,255 million euros and a profit forecast of 274 million euros.

In addition, at its meeting, the Blaugrana team's body also closed the 2021/2022 financial year "with a turnover of 1,017 million euros and a profit of 98 million euros," according to a statement.

The Board reported that the next Ordinary General Assembly of Compromising Members, scheduled for October 9, will be held electronically with the 4,451 participating members who are summoned, and reported on the start of partial demolition works of the third tier and tender for the construction management of the 'Espai Barça'.

"The Board of Directors has been informed of the evolution of the demolition works of a part of the third tier of the South Goal of the Spotify Camp Nou, which began on September 1, with a series of previous works, and with the removal of the electronic video scoreboard of the South Goal, among other actions. Some works promoted to take advantage of the window of opportunity offered by the stoppage of the competition for the World Cup dispute, between November and December, "said the club.

In this sense, the Board of Directors expressed "its gratitude to the subscribed partners affected by this start of works, for their collaboration and understanding", and indicated that the vast majority will be relocated to similar or even higher locations; while a small part has taken advantage of "the option of leave of absence".

In addition, FC Barcelona clarified that it has "completed" the development of the Basic Advanced Project for the reform of the Spotify Camp Nou, in charge of the Japanese company 'Nikken Sekkei', together with IDOM and b720 Fermín Vázquez Arquitectos, who have terminated their contract last August 15. "Therefore, there has been no termination of the contract, as has been reported in recent days in some media, but rather a termination of the contract," he pointed out.

Now, once this project has been completed, the bidding process for the construction of the new Spotify Camp Nou has already begun and the bidding process corresponding to the direction of the work has also been completed. "At today's meeting, the Board of Directors has approved that this task falls to the joint venture formed by the Catalan companies Engineering and Architecture Torrella and JG Engineers. This joint venture will direct the construction phase of the new stadium assuming the design of IDOM and b720" , reported.

In any case, FC Barcelona confirmed that it is still working with 'Nikken Sekkei', winner of the design competition for the new stadium in 2016, for the tasks of 'Design Guardian' for the remodeling project of its stadium, "supporting the bidding process of the works, in the drafting of the Execution Project and in the direction of the works".

"In the framework of a meeting with President Joan Laporta, held a few days ago, the College of Architects of Catalonia (COAC), through its dean, Guim Costa and Calsamiglia, has been informed of this bidding process, as well as other aspects linked to the evolution of the Espai Barça", he added, highlighting that in the coming quarters the bidding processes for the executive works management (rigger), health and safety control (occupational risks) and quality control will begin.