Expelled from Spain Mohamed Said, the Islamist leader accused of pro-jihadism and recruiting minors in Tarragona

After his arrest by the Police, he received the support of pro-independence parties and United We Can. 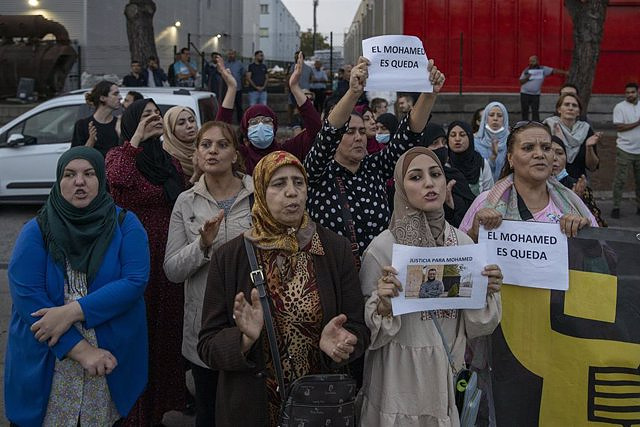 After his arrest by the Police, he received the support of pro-independence parties and United We Can

Mohamed Said Badaoui, the resident of Reus (Tarragona) whom the National Police accuses of being a danger to national security for participating in "pro-jihadist" activities, such as recruiting vulnerable minors of Moroccan origin, has been expelled from Spain, they have reported. to Europa Press police sources.

The aforementioned sources indicate that Mohamed Said, a prominent leader of the Islamist community in Catalonia, is already in Morocco after being interned until his expulsion in a center for foreigners. He was arrested on October 19 and, during his stay in a CIE, he has received visits from NGOs and human rights associations.

ERC, CUP, Junts and Unidas Podemos-En Comú Podem denounced after his arrest that Mohamed Said is a victim of "political repression through the Aliens Law". Hence, they urged the Generalitat of Catalonia to "activate all administrative, legal and diplomatic tools to ensure their rights."

The decision of the National Court also affected Amarouch Azbir, arrested for the same reasons of being a danger to national security, when the magistrates dismissed the very precautionary measures requested by Said and Azbir in the appeals presented by both against the resolution issued on the past 14 September by the Secretary of State for Security of the Ministry of the Interior. In said resolution, it was agreed to expel him from the national territory and prohibited them from returning in ten years.

In the case of Said, the Chamber recalled that the Interior's decision is based on a complaint from the General Information Commissioner warning of "his ideological radicalism", specifically mentioning the "indoctrination" in his community through the dissemination of "postulates pro-jihadists". The car reflected that he had been transferred from Reus to Madrid "to be expelled tomorrow", in reference to Friday, October 21.

Thus, the Police define him as "one of the main references in Spain of the most orthodox Salafism, which he preaches, with such influence that, since his arrival, there has been an increase in radicalism in the Tarragona region because of his speech ". In addition, he warns that he would have "ties to radical individuals related to terrorism."

It details that Said has dedicated himself "for years" to "proselytizing and recruitment activities, especially with the most vulnerable and manipulable groups, paying special attention to minors, specifically unaccompanied minors, mainly of Moroccan origin, indoctrinating them in the most radical Salafism". He would also have dedicated himself to promoting "victimism and occidentalophobia".

However, the Chamber considers that in this specific case the interests of a "general nature" should prevail over those of a personal nature, since it is accused of "a very serious infraction provided for in article 54.1.a) of the Organic Law 4 /2000, of January 11, which classifies as such participation in activities contrary to national security or that may harm Spain's relations with other countries".

The magistrates emphasize that the rejection of the very precautionary measures does not prevent the appeals from continuing their course in the National Court. For the Chamber, their eventual expulsion will not cause irreparable damage, although it will be "difficult to repair", since if Justice finally agrees with Said and Azbir "no obstacle is seen in the return to our country and, if applicable, the repair of the damages caused".

It should be remembered that Said was arrested on Tuesday by the National Police along with another leader of the Islamic community of Catalonia after opening an expulsion file for them, after the report from the information services that decreed their expulsion from the country for "posing a threat for national security" for alleged ideological radicalism.

‹ ›
Keywords:
MarruecosPolicía
Your comment has been forwarded to the administrator for approval.×
Warning! Will constitute a criminal offense, illegal, threatening, offensive, insulting and swearing, derogatory, defamatory, vulgar, pornographic, indecent, personality rights, damaging or similar nature in the nature of all kinds of financial content, legal, criminal and administrative responsibility for the content of the sender member / members are belong.
Related News