Eusebio Cáceres and the 1,500 will fight for the medals in Munich 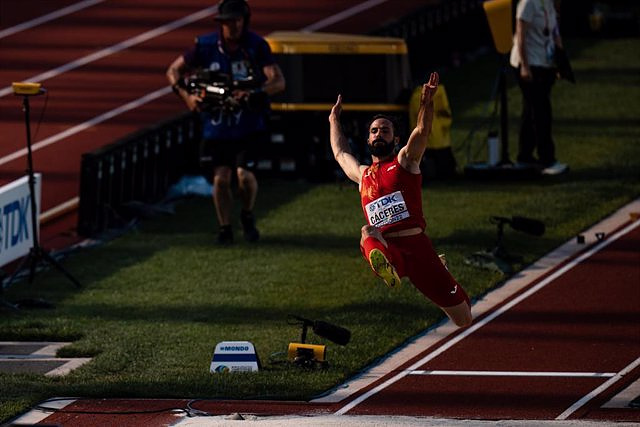 The Spanish athletics team experienced a good first day at the European Championships in Munich (Germany) on Monday, with Eusebio Cáceres, in the long jump, and Ignacio Fontes, Gonzalo García and Mario García Romo, in the 1,500.

For the sixth time in history, Spain will have three athletes in the 1500m European final. In the first of the two series, Fontes and García provided excitement until the last straight, but they showed that they had more than enough to not depend on the playoffs.

Fontes entered third with 3:39.00 and García, fourth with 3:39.20 after overtaking the British Jake Heyward in the last meters. In the second series, García Romo controlled the race at all times, at the head of the group and finally third (3:38.04) to complete the full Spanish in the final on Thursday.

Meanwhile, in the 400, the performance was uneven, with Iñaki Cañal qualifying for the semifinals, but with the elimination of the Spanish champion Óscar Husillos and Manuel Guijarro. In addition, in the weight final, Belén Toimil was at the gates of achieving a position among the eight best in Europe.

The Galician pitcher showed her best version in the last two months, throwing the ball at 17.86 meters, just 15 centimeters from the finalist position. With her ninth place, Toimil equaled the best place of a Spanish in the history of the Europeans.

On the other hand, both Cáceres and Héctor Santos will be in the length final this Tuesday. The man from Alicante, fourth in the Tokyo 2020 Olympic Games, has had a sore foot since the World Cup last month, but he got a round classification.

The one from Onil made a single jump and, with the 7.93 he signed, he advanced to the final with the third best mark. Meanwhile, Santos passed as tenth, with much more suspense than his partner, arriving at the fight for the medals by only two centimeters. Since Helsinki 2012, Spain did not have two jumpers in the men's long final.

Meanwhile, in the weight classification, Belén Toimil and Carlos Tobalina starred in heads and tails. Tobalina, who opened the Spanish performance at the Olympiastadion, failed to advance to Monday's final with 19.58, while Toimil was able to play the afternoon session at the Munich Olympic.

In addition, in the 100-meter heats, Jaël-Sakura Bestué reached the semifinals without problems (11.39), where Maribel Pérez was already waiting, classified directly as she had one of the 12 best times of the year. Sonia Molina-Prados did not make the pass and neither did Sergio López Barranco, disqualified for a false start when moving on the studs, with a reaction time of 0.067.