Escrivá advances some 40,000 new jobs in September, twice as many as before the pandemic

The Minister of Inclusion, Social Security and Migration, José Luis Escrivá, has advanced this Tuesday that the system will close the month of September with some 40,000 new Social Security affiliates in average terms, double the increases that had been recorded in the months of September before the Covid pandemic (about 17,000 more on average between 2017-2019). 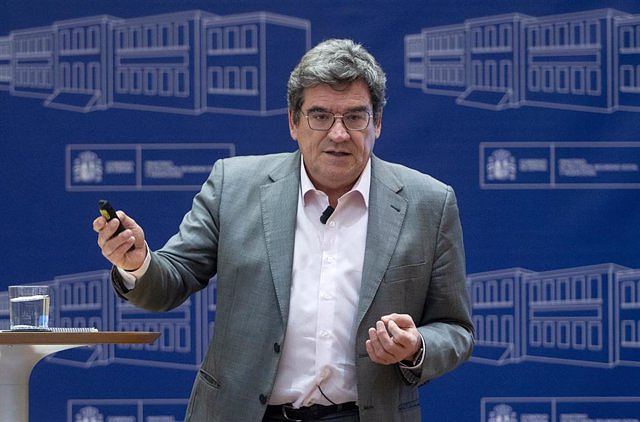 The Minister of Inclusion, Social Security and Migration, José Luis Escrivá, has advanced this Tuesday that the system will close the month of September with some 40,000 new Social Security affiliates in average terms, double the increases that had been recorded in the months of September before the Covid pandemic (about 17,000 more on average between 2017-2019).

Despite this, Escrivá prefers to look more at the seasonally adjusted data, which indicates that membership will increase this month by some 60,000 contributors, also above the 43,000 average for the 2017-2019 period.

For the minister, these data confirm that the labor market "surprisingly resists" the current context of uncertainty. "Having 60,000 more affiliates would be good in any context, but in the current one more," remarked the minister, who added that since affiliation exceeded the pre-pandemic level in August 2021, the Spanish economy has generated 750,000 jobs, of which that 400,000 have been created this year.

At a press conference to present the progress of affiliation for September, Escrivá highlighted that the recovery in employment is reaching almost all economic sectors, being more intense in activities with higher added value.

The variation in affiliation is "particularly favourable" compared to pre-Covid levels in the IT and telecommunications sectors (17.4%), health activities (9.6%) and professional, scientific and technical activities (9.2%) .

"We do not see any significant impact on job creation despite what is raining. I am quite perplexed by the reflections that this is going to go wrong. Our analytical energies should be directed at analyzing the resilience of the Spanish economy in the complex international context", he stated.

Asked if one of the reasons that is promoting the maintenance of job creation is that companies are transferring the cut in their margins to sales prices, Escrivá considers that he "tends to think" that the fundamental reason that companies have not modified their hiring and investment decisions in the medium term, it is because they consider that the current disturbances are "of a temporary nature".

The minister has underlined that not only is employment being created, but it is also of higher quality thanks to the labor reform. Thus, 83% of affiliates currently have an indefinite contract, 14 points above the pre-pandemic years.

This improvement in the quality of employment has also led to an increase in the average duration of contracts: so far this year, more than 600,000 contracts of more than 30 days have been signed compared to the same period in 2019.

In turn, the minister stressed that the increase in the quantity and quality of employment is producing a "sustained" growth in income from social contributions, which in August showed an accumulated annual increase of 9%, compared to 8.6 % of July and 8% of June.

The increase in income from contributions exceeds the increase in pension spending by 2.6 points, which, according to the minister, reinforces the sustainability of the Social Security system.

‹ ›
Keywords:
Seguridad SocialPortal EmpleoEscrivá
Your comment has been forwarded to the administrator for approval.×
Warning! Will constitute a criminal offense, illegal, threatening, offensive, insulting and swearing, derogatory, defamatory, vulgar, pornographic, indecent, personality rights, damaging or similar nature in the nature of all kinds of financial content, legal, criminal and administrative responsibility for the content of the sender member / members are belong.
Related News