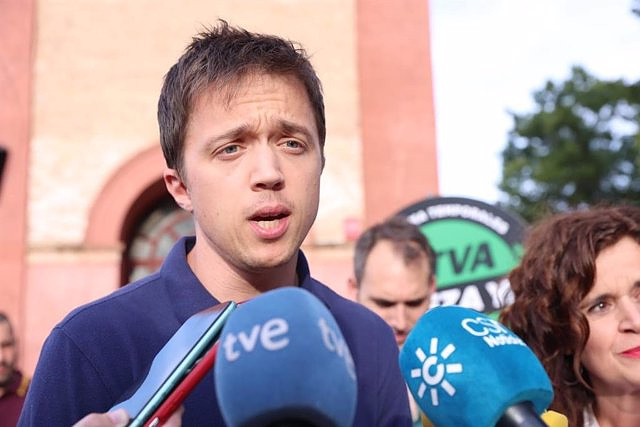 The leader of Más País, Íñigo Errejón, has warned the government that it will not accept that in the reform of the crime of sedition "possibilities of criminalizing protest or the free exercise of demonstration slip through the back door."

This has been expressed before the start of the demonstration by the Public Health in Madrid, in which he has ratified his support for the repeal, which he believes was "necessary for a long time."

Specifically, he has defended the reform because with it Spain is homologous to the rest of the European countries, but he has set some conditions: "We are not going to accept that in order to modify a point in the Penal Code, the penal types that apply to it can be extended for example for disorders to people who demonstrate or activists in the street".

On the other hand, he has asked the leader of the PP, Alberto Núñez Feijóo, to stop "playing with coexistence" to "try to cover up the disaster that the PP is making in Health", for example, in the Community of Madrid. "It is an indecent smokescreen", he has sentenced him.

‹ ›
Keywords:
Íñigo ErrejónMás País
Your comment has been forwarded to the administrator for approval.×
Warning! Will constitute a criminal offense, illegal, threatening, offensive, insulting and swearing, derogatory, defamatory, vulgar, pornographic, indecent, personality rights, damaging or similar nature in the nature of all kinds of financial content, legal, criminal and administrative responsibility for the content of the sender member / members are belong.
Related News