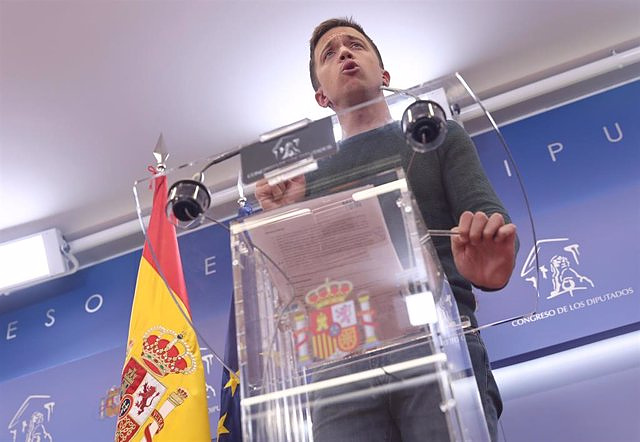 The spokesman for Más País in Congress, Íñigo Errejón, has defended the repeal of the crime of sedition but has demanded from the PSOE and United We Can that the measure they have proposed as an alternative, the aggravation of the criminal treatment of public disorder, does not end up harming to citizen or trade union mobilizations. He also sees well that embezzlement distinguishes those who profit from public money from those who do not.

At a press conference in Congress, Errejón assured that his formation has always supported the adoption of measures that allow "directing the political conflict" in Catalonia, which in his opinion is not resolved with the tightening of the Penal Code.

For this reason, he considers that the bill proposed by the PSOE and United We Can to abolish the crime of sedition, the same one that was applied to those convicted in the cause of the 2017 independence process, "is a fair and necessary reform that homologates Spain with the environment".

But if you have objections to the aggravation of the crime of public disorder, then you are concerned that, in the future, it could be used against demonstrators, neighbors who stop evictions or worker protests. "If the government wants to count on our vote, this has to be reformed," he warns.

Regarding the possibility that the ERC takes the opportunity to also reform the crime of embezzlement, the other one that supported the sentences of the procés prisoners, Errejón defends that adjustments be introduced to differentiate between those who use public money to profit, for those who demand to be "relentless", of the use of this crime to combat a different ideology such as independence.

In his opinion, the protests against this reform are due to the fact that Alberto Núñez Feijóo's PP "needs to make a huge noise to cover up the disaster it is making with public health", and they are once again using "the wild card of Catalonia".

‹ ›
Keywords:
PSOEÍñigo ErrejónPodemosMás País
Your comment has been forwarded to the administrator for approval.×
Warning! Will constitute a criminal offense, illegal, threatening, offensive, insulting and swearing, derogatory, defamatory, vulgar, pornographic, indecent, personality rights, damaging or similar nature in the nature of all kinds of financial content, legal, criminal and administrative responsibility for the content of the sender member / members are belong.
Related News