Accuses Greece of committing crimes against humanity and turning the Aegean Sea into a "cemetery". 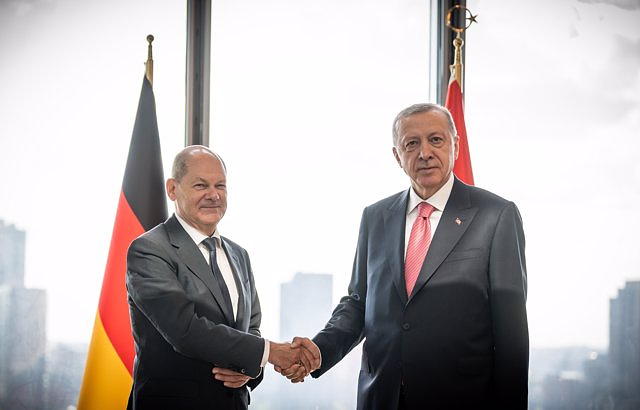 The President of Turkey, Recep Tayyip Erdogan, has defended his country's mediation work in the war unleashed in February in Ukraine, under the premise that only through diplomacy can a "dignified" solution be achieved and a "just" solution reached. "and acceptable to all parties.

Turkey, Erdogan has said, is in a region that is the focus of conflicts but always wants to be "part of the solution", a message that has been the focus of part of his speech before the United Nations General Assembly, the meeting point during these days of the main international leaders.

In this sense, he considered historic the agreement to export grain from Ukraine, in which Ankara mediated together with the UN. It was, in his own words, "one of the most important achievements of the United Nations in recent decades", to the extent that it served to restore "confidence" in the organization and demonstrated that "negotiations can produce results."

During his speech, Erdogan expressed his concern for the safety of the Zaporizhia nuclear power plant, at a time when "the conflict is intensifying", and has called for work to "guarantee the territorial integrity and sovereignty" of Ukraine.

"We need a dignified way out of this crisis," Erdogan claimed, defending a "fair" diplomatic solution.

That same justice is what is demanded of the United Nations as a whole, to the extent that the Turkish president is in favor of a "more inclusive" organization. His plan goes through a reform of the Security Council, the main executive body of the UN, to make it "more effective, more democratic, more transparent."

Erdogan has reviewed other current international issues, including Syria, Iraq, Afghanistan, Iran and Libya, but he has also dedicated a part of his speech to attacking Greece again, in full escalation of tensions between the two neighboring countries on account of the activities of both in the Aegean.

The Turkish president has exhibited an image of the corpses of two children to allegedly demonstrate that the Greek coastguard violates the rights of migrants and refugees in an "inhumane" way, with returns and sinking that would be turning the Aegean into a "cemetery".

According to Erdogan, the Greek authorities commit crimes against humanity. "It is time for Europe, the United Nations and other organizations to say enough," claimed the president, who has urged Greece to put an end to the "provocations" of recent weeks.

"It is clear who is in favor of peace and who is in favor of tension," added Erdogan, who also sees room for dialogue and achieving a solution to the "problems" on the island of Cyprus. In his opinion, this solution involves recognizing the "rights" of the Turkish-Hipriots and putting an end to all "blockade".

In relation to the conflict between Israelis and Palestinians, the Turkish president has advocated continuing to work for peace, since this is not only to the benefit of the parties but of the entire region, although he has warned that "there is no alternative" to a two-state solution with East Jerusalem as the Palestinian capital.

‹ ›
Keywords:
TurquíaErdoganUcrania
Your comment has been forwarded to the administrator for approval.×
Warning! Will constitute a criminal offense, illegal, threatening, offensive, insulting and swearing, derogatory, defamatory, vulgar, pornographic, indecent, personality rights, damaging or similar nature in the nature of all kinds of financial content, legal, criminal and administrative responsibility for the content of the sender member / members are belong.
Related News