ERC refuses to send tanks to Ukraine and demands that, if considered, it be put to a vote in Congress 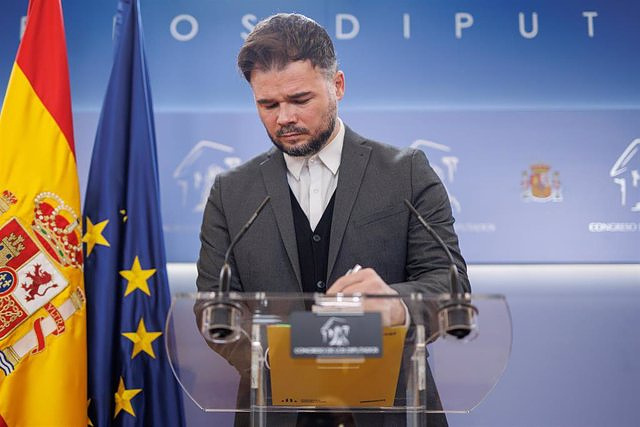 The ERC spokesman in Congress, Gabriel Rufián, has demanded this Wednesday that the Government that if it plans to join Germany's decision to send tanks to Ukraine, request authorization from the Lower House and has announced that his group would not support this measure.

"It's a first of democracy, such a transcendental decision should go through Congress," he commented during his participation in a breakfast organized by the New Economy Forum, in which he made it clear that he "would not vote in favor" of that shipment.

According to Rufián, "diplomacy is essential" and for this reason he has praised the steps being taken by some European chancelleries and has rejected "promoting the language of war."

"We are a government party that tries to go far beyond the banner," he added, before stressing that he does not share "Europe's uncritical discourse on NATO and the United States" which, he stressed, does not imply "whitewash Putin, who is a satrap who has attacked Europe".

‹ ›
Keywords:
AlemaniaERCUcrania
Your comment has been forwarded to the administrator for approval.×
Warning! Will constitute a criminal offense, illegal, threatening, offensive, insulting and swearing, derogatory, defamatory, vulgar, pornographic, indecent, personality rights, damaging or similar nature in the nature of all kinds of financial content, legal, criminal and administrative responsibility for the content of the sender member / members are belong.
Related News