England-Germany breaks the attendance record in a European Championship final 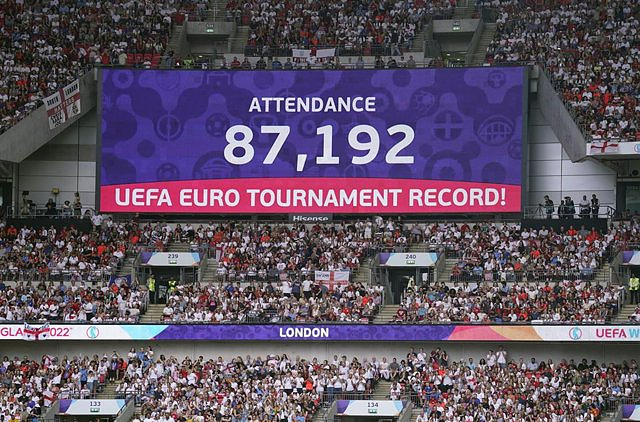 The match played this Sunday between England-Germany has broken the attendance record in a European Championship final by bringing together 87,192 fans in the Wembley stands, a milestone for the tournament that surpasses the 1964 men's final, between Spain and the Soviet Union , which was played before 79,115 spectators at the Santiago Bernabéu Stadium.

The hosts lifted the continental trophy in front of their home crowd in a record competition, smashing the total attendance records. Approximately 80,000 spectators were part of the women's game with the third highest attendance, only surpassed by two matches for the women's FC Barcelona at the Camp Nou, in the first leg of the quarterfinals and the semifinal of the 'Champions', with 91,553 spectators against Real Madrid and 91,648 against Wolfsburg.

Euro 2022 has doubled the 240,055 spectators of the 2017 edition in the Netherlands, raising the presence to 574,875 fans. The 2022 final tournament thus boasts the highest attendance figures for a women's EURO, after the mark of five years ago was already surpassed during the matchday two match between France and Belgium.

Furthermore, before the opening match of this edition, the largest crowd for a single final tournament match was 41,301, set when Germany beat Norway in the 2013 final in Sweden.

Another record fell for the third time on matchday three when 22,596 saw the Netherlands beat Switzerland in Sheffield, the most in a match not involving the host nation apart from a final. Since then, new highs have also been recorded in the quarter and semi-finals both overall and in matches without the country of origin.

‹ ›
Keywords:
Eurocopa
Your comment has been forwarded to the administrator for approval.×
Warning! Will constitute a criminal offense, illegal, threatening, offensive, insulting and swearing, derogatory, defamatory, vulgar, pornographic, indecent, personality rights, damaging or similar nature in the nature of all kinds of financial content, legal, criminal and administrative responsibility for the content of the sender member / members are belong.
Related News