Some 2,000 guests are already waiting in the temple that will host the state funeral. 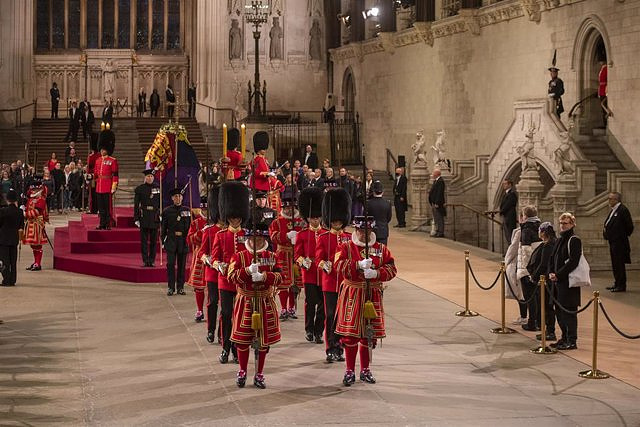 Some 2,000 guests are already waiting in the temple that will host the state funeral

The funeral procession with the remains of Queen Elizabeth II of England has left the seat of Parliament for Wesminster Abbey, where a state funeral will take place with some 2,000 guests, including half a thousand international leaders.

The coffin, covered by the royal standard and with the imperial crown, advances on the same armored car that already transported the remains of his father, George VI, and other former monarchs and leaders such as Prime Minister Winston Churchill. Next to the car 142 members of the Royal Navy advance.

Behind, as in previous processions, the coffin is accompanied on foot by King Charles III and other members of the royal family, including Prince William, first in line to the throne.

Guillermo's two eldest children, second and third in this same line, entered the abbey just a few minutes ago accompanied by their mother, Catalina, and the queen consort, Camila, as a climax to the arrival of guests.

Everyone is already in the abbey, which has opened its doors first thing in the morning to allow time for the wide parade of attendees. In addition to the current prime minister, Liz Truss, special treatment has been given to all the former heads of government, who have entered the temple together and in chronological order, depending on their respective mandates.

The representatives of the Commonwealth countries that have the British monarchy as a reference and that, with the death of Elizabeth II, have also lost their own head of state, have also been differentiated in a specific way.

The state funeral will start around 11:00 (one more hour in mainland Spain), an act that will be led by the Dean of Westminster, David Hoyle, with a sermon by the Archbishop of Canterbury. After mass, there will be two minutes of silence that can be extended to the entire country.

A new funeral procession to Wellington Arch will mark the beginning of the transfer of the coffin to Windsor Palace, where a last mass in memory of Elizabeth II will take place in the afternoon, already in private, and her burial will proceed. Her remains will rest in St. George's Chapel, along with those of her late husband, Prince Philip, and those of her parents.