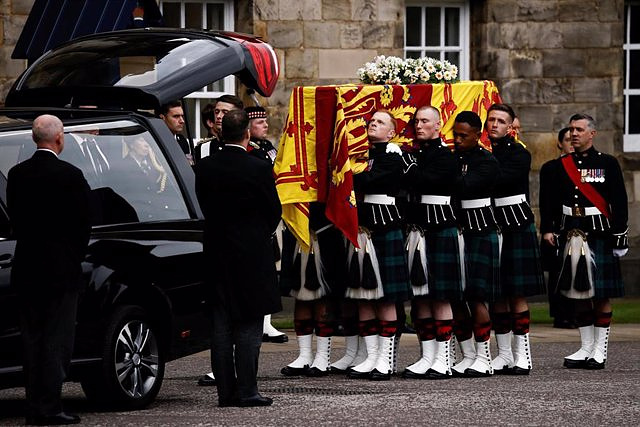 The coffin of Queen Elizabeth II has arrived at Holyrood Palace in Edinburgh on Sunday afternoon after six hours of travel from Balmoral Castle, in the Scottish Highlands, where she died last Thursday.

The procession has traveled more than 280 kilometers passing through the towns of Aberdeenshire, Aberdeen, Angus and Tayside before reaching the capital of Scotland.

The remains of the queen have been received at Holyrood by her grandchildren Ana, Andrés and Eduardo and a guard of honor that has moved the body inside, to the Throne Room, where they will spend the night. Carlos III is in London, but he is expected to travel to Edinburgh on Monday.

On Monday afternoon they will be transferred to the Cathedral of San Gil, where a 24-hour burning chapel will be installed so that the population can pay their respects to the late monarch.

The transfer of the coffin to London is scheduled for Tuesday and to Buckingham Palace. A day later, there will be a new procession to Westminster, where a burning chapel will be set up that will precede the state funeral, scheduled for September 19.