He reproaches "spurious" motives in the amendments to the Trans Law and breaking the pact in Families, which accumulate to other conflicts. 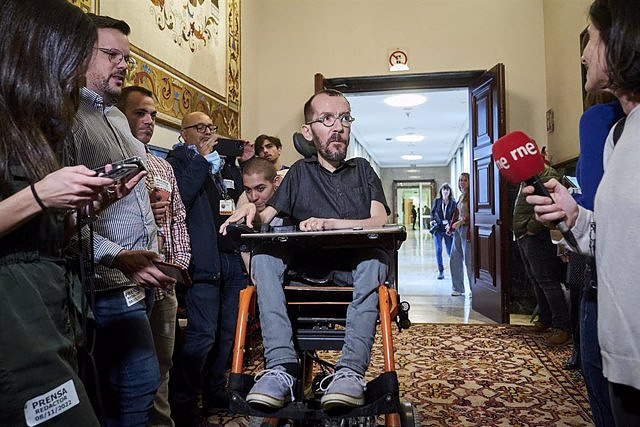 He reproaches "spurious" motives in the amendments to the Trans Law and breaking the pact in Families, which accumulate to other conflicts

The spokesman for United We Can in Congress, Pablo Echenique, has warned that he appreciates "worrying signs" that the PSOE is immersed in "electoral calculations" after the approval of the General State Budget (PGE) for next year, under the latest disputes in the coalition and with the "blocking" of legislative initiatives promoted by the confederate space.

During a press appearance in the Lower House, the leader of the purple formation has raised the tone in front of his partner to stress that the situation of the Trans Law and that of Families are two "prominent examples" of this drift in the socialists , which is added to other conflicts such as the proposal to extend the calculation of pensions from the Ministry of Social Security, which they flatly reject.

"The PSOE would be wrong if it thought that the fact that laws led by Unidas Podemos do not come out has some kind of advantage, because in reality it is a disadvantage for the citizenry as a whole and for the coalition government," he stressed to warn of who perceives "political calculation" in his partner.

Likewise, he has criticized that the PSOE has not given explanations for the delay in the approval of the Family Law, breaking the agreement for it to be approved today in the Council of Ministers, and resorting to "spurious" arguments to keep its amendments to the Trans regulations, which in his opinion imply cuts in the rights of groups, especially minors, with an approach that could support the PP and even Vox.

It is not the only point of friction within the Executive, which has also been caused by the Anti-Trafficking Law, the Housing Law and the repeal of the Citizen Security Law, known by its detractors as the Gag Law, among other matters. .

In fact, he has disdained the argument put forward by the PSOE referring to the need to provide more legal certainty to the Trans Law, which is a legislative project that emanates from the Council of Ministers, that is, that the PSOE is a co-proponent after intense negotiation and go through various consultative phases.

"To me that the PSOE says that a law that has its signature does not have legal certainty seems difficult to explain. Is the PSOE perhaps saying that they make laws without legal certainty?", he questioned to indicate that the answer is no and that His position to continue with his changes to the law responds to other ulterior motives.

‹ ›
Keywords:
Presupuestos GeneralesPSOEPodemosPablo Echenique
Your comment has been forwarded to the administrator for approval.×
Warning! Will constitute a criminal offense, illegal, threatening, offensive, insulting and swearing, derogatory, defamatory, vulgar, pornographic, indecent, personality rights, damaging or similar nature in the nature of all kinds of financial content, legal, criminal and administrative responsibility for the content of the sender member / members are belong.
Related News