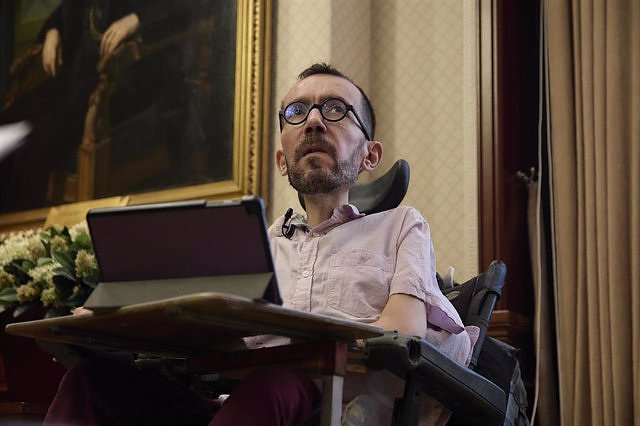 The spokesman for United We Can in Congress, Pablo Echenique, has assured that the purple formation does not contemplate another possibility other than reaching an agreement with 'Sumar', the platform promoted by the second vice president Yolanda Díaz, to go to the general elections, since the unit on the left is your "strategic" position.

At the same time, he has ruled out the possibility of running alongside the PSOE in the next elections in some constituencies, a hypothesis that he sees as "a little absurd" because both formations are separated by a "large" distance so that it is "possible". And it is that, for example, he has defined his coalition partner as a "monarchist party".

The second vice president said yesterday in an interview that the PSOE "is not mature" to go on joint lists in some constituencies for the Senate, while the socialist spokeswoman, Pilar Alegría, said that her formation has 136 years of history and is a party of majorities.

In statements to 'Radiocable', collected by Europa Press, Echenique explained that his formation is exclusively committed to alliances with the parties of the transformative left and, in this context, "does not contemplate the possibility that there is no agreement" with Sumar to go to the next election.

"We have been very clear. Sumar is an (electoral) ally and we will always work to go to the elections together, the only thing missing," emphasized the leader of Podemos.

He has also stated that it is "obvious" that Díaz is building a new political project and, consequently, his time must be respected, since no one from abroad should tell him if he has to go faster or less in the steps he must take.

From there, the parliamentary spokesman has highlighted that Podemos is going to try to expand the space to the left of the PSOE, something that is in its DNA and that they have already demonstrated with the alliance with IU to create the current United We Can, a decision that they forged for "conviction" and "generosity" when the purples reached the hegemonic position in space.

He has also said that on a personal level he will act responsibly and "lend a hand" in the political front row if he is considered "useful" in his space.

However, he has urged to stop talking internally, given that the second vice president will not make a decision on his possible candidacy until the end of the year or January, so there are a "lot of months" to go.

Therefore, he has opined that it is good for the left to talk "a little" about how it will organize itself in the future, but it is essential to give a message to citizens that focus on their problems, because the organic debate is something that distances the politics people.

Finally, Echenique has assured that he is in favor of reissuing a coalition government with the PSOE, which is a "conquest" of his space, although he trusts that United We Can have the majority weight of the Executive after the general elections after the future elections.

‹ ›
Keywords:
PSOEPodemosPablo EcheniqueYolanda Díaz
Your comment has been forwarded to the administrator for approval.×
Warning! Will constitute a criminal offense, illegal, threatening, offensive, insulting and swearing, derogatory, defamatory, vulgar, pornographic, indecent, personality rights, damaging or similar nature in the nature of all kinds of financial content, legal, criminal and administrative responsibility for the content of the sender member / members are belong.
Related News