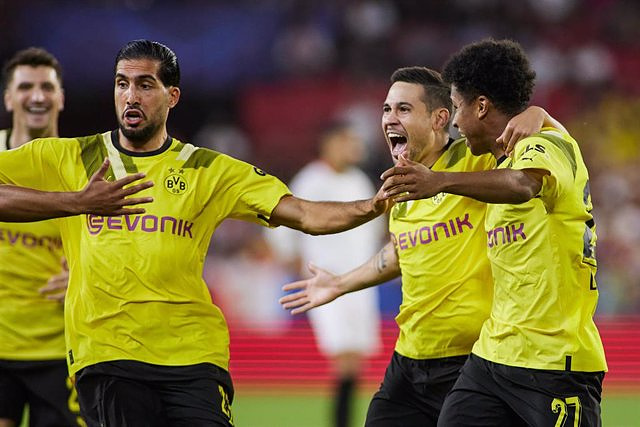 Borussia Dortmund sentenced the future of Julen Lopetegui on the Seville bench and that of Sevilla in the Champions League with a win (1-4) in the third day of group G, played at the Ramón Sánchez Pizjuán, based on a first half in which it passed like a cyclone over a downcast rival.

It was the chronicle of a death foretold. With the rumor of the arrival of the return of Jorge Sampaoli to straighten Sevilla's course, Dortmund's 'punch' was an excessive punishment for a team that puts more intensity than football in this first leg of the course in domestic and continental competition.

A change of game by the English international Jude Bellingham shortly after the start was taken advantage of by the Portuguese Raphael Guerreiro to cross his shot to the post, in the 6th minute, which Bono's exchanged hand could not reach and increase the problems with the 0-1 of those of Lopetegui who did not expect this blow so early.

En-Nesiry failed twice just a few minutes (9) after the tie, but his error was a reflection of the lack of confidence of a Sevilla that conceded 0-2 and 0-3 in the boots of Bellingham, who cut Gudelj and shot from the toe, and Adeyemi just before the break against a dedicated opponent.

With everything to do, Julen Lopetegui sought to revolutionize the game with the changes of Montiel and Lamela instead of Navas and Suso on the way back from the locker room. En-Nesiry's goal (1-3) at the start of the second half when he headed in a corner kick was a mirage in the midst of local impotence.

The Moroccan striker was able to give some life to Sevilla, and to Lopetegui, on a couple of occasions, although the sentence was put by Brandt when he headed it 1-4, only scoring in the 75th minute, in a defensive error that joined the carousel of those that he has accumulated in this beginning of the year, which is a blur.

Sevilla added a new win at home like that of Manchester City (0-4) and, after the goalless draw against the 'cinderella' Copenhagen (0-0), they are penultimate in their group, with 1 point, the same as the Danish team and 5 points from a Dortmund that this Wednesday was a cyclone and ended Lopetegui's project in the Seville bank.