Diego Martínez: "Raúl de Tomás will return when he decides and feels he is fit" 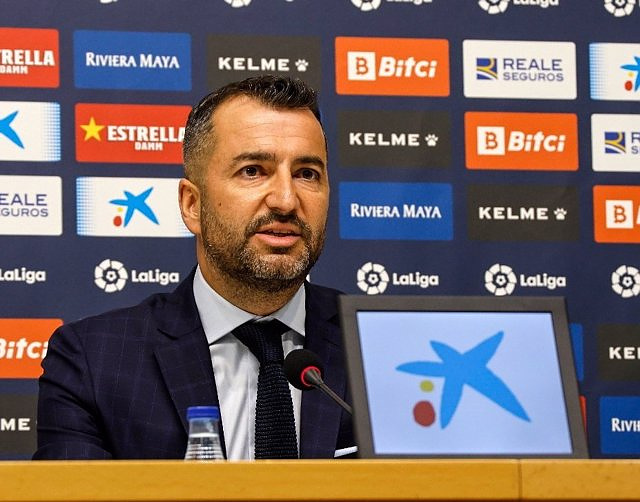 The RCD Espanyol coach, Diego Martínez, has assured that striker Raúl de Tomás is training on the sidelines at his own request due to "some inconvenience" and will return to the team's discipline when "he feels he is in full physical, emotional and mental condition ", and explained that they are "far" from the level they hope to offer this course and that they must "reformulate certain expectations".

"Raúl joined Pol Lozano on the 14th. He comes with some discomfort. We have fluid communication, it is important that the player is in the best possible condition to train with the group. He marks his process, how he feels, the discomfort you have, what you need to find your best version," he declared at a press conference.

In this sense, he explained that the striker told them that he preferred to train "more gradually" and "at a different pace to deal with these discomforts." "Every week we communicate. When he decides and feels that he is in a position to be with the team, he will do more training; in some task with the team, he did not feel in a position and that is why we have had that individualized work", advanced.

"We are in complete communication, and when he feels that he is in full physical, emotional and mental condition to be 100% with the team, he will tell us," he continued, assessing a possible departure from Madrid. "I greatly respect the personal situations of each one, although we would like everything to be much clearer. In my teams I want the best players who are willing to give 100%," he warned.

On the other hand, the Galician coach acknowledged that they are "aware" that they need to "incorporate players". "There is less and less time left, but we hope that the planned plans come to fruition. These are the ideal times for us and the ones we would most like eight days before the League match, but we have to adapt. We have to reformulate certain expectations and adapt to the current reality, and with that to compete. What has not changed is the illusion for a project that we are starting", he assured.

"In practically every line we have to make important additions, we have to be on the lookout for the market. The club is working very hard on this facet, but it is true that there have to be some exits. We have communicated this to the players who must leave , looking them in the eye; everyone was grateful that we were direct," he added about the possible departures of Aleix Vidal, Wu Lei, Landry Dimata and Matías Vargas.

About them, he assured that they were training at "a different rhythm" and with a "specific plan", but that they have had "the same treatment as the rest" and that they have traveled with the team. "It is not normal at this point that we are like this, but we have to carry it with total normality. If I were in his place, I would not risk my physique either, being able to spoil an operation," he said.

He also stressed that Tonny Vilhena's case is "different." "He has a very particular situation both with the club and with his club of origin, a contractual issue. He exposes his situation to us, we are very respectful. We support him, but it is not a sporting situation with him. When he resolves his contractual situation, we will see It has to do with non-sporting issues," he said.

Regarding Adrián Embarba, he explained that "today he is injured" and that he has "a discomfort in the sartorius". "That is Adrián's situation. From then on, the market is very broad, there are many days left and we are professionals," he stressed.

Neither he nor Pol Lozano, Adrià Pedrosa nor Javi Puado, in addition to 'RDT', will travel to Italy to face Naples at the Stadio Teofilo Patini, a friendly match whose "level of demand" he considers to be "well above" what that they can currently assume and that will serve to continue "taking minutes". "We are far from what we need to be the team we want to be," he said.

"It has been a preseason with a bit of everything. We are very happy with the team's attitude, the predisposition of the players has been magnificent. It is being a very complex preseason in terms of availability, we would like to be more advanced in terms of identity of the team," he said.

Finally, Martínez spoke about the role that the youth squad will have this season. "It's not a question of merit, it's a question of performance. I believe in processes and you have to be calm with all of them. We can't subject them to excessive demands. We're happy with their attitude," he concluded.

‹ ›
Keywords:
RCD Espanyol
Your comment has been forwarded to the administrator for approval.×
Warning! Will constitute a criminal offense, illegal, threatening, offensive, insulting and swearing, derogatory, defamatory, vulgar, pornographic, indecent, personality rights, damaging or similar nature in the nature of all kinds of financial content, legal, criminal and administrative responsibility for the content of the sender member / members are belong.
Related News