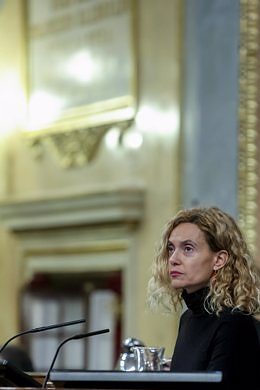 The deputy Pablo Cambronero, who left Ciudadanos in 2021 and who is currently attached to the Mixed Group of Congress, has addressed a letter to the president of the Chamber, Meritxell Batet, to clarify the list of "prohibited words" that are not going to be allow in plenary.

Cambronero has sent this letter after the last row that occurred in the plenary session of Congress when from the Presidency, then occupied by the socialist Alfonso Rodríguez Gómez de Celis, the Vox deputy Patricia Rueda was thrown from the rostrum for refusing to withdraw the expression " filoetarra" that he dedicated to Bildu, a measure that caused all the deputies of his group to leave the chamber in protest.

The truth is that in the previous debate, which Meritxell Batet was chairing, the also deputy for Vox Cristina Esteban Calonge referred to the left of the chamber as "communists, seditious, separatists and heirs of ETA", without anyone calling her attention .

And this same Wednesday, in the control session and also under the Presidency of Batet, Abascal has abounded in these criticisms, accusing the Government of prioritizing "coup plotters" and "filoterristas". Nothing was said to him from the Presidency either. At the Board of Spokespersons on Tuesday, the president had already reprimanded those responsible for the groups for the tension in the chamber.

In his letter, the deputy Cambronero does not consider the term "filoetarra" directed at Bildu offensive given that in his direction there are convicted for their links with ETA, but in any case he wants the president to clarify what are those "forbidden words" that may lead to being evicted from the grandstand.

‹ ›
Keywords:
CiudadanosCongreso De Los DiputadosMeritxell Batet
Your comment has been forwarded to the administrator for approval.×
Warning! Will constitute a criminal offense, illegal, threatening, offensive, insulting and swearing, derogatory, defamatory, vulgar, pornographic, indecent, personality rights, damaging or similar nature in the nature of all kinds of financial content, legal, criminal and administrative responsibility for the content of the sender member / members are belong.
Related News