Defense sends a new shipment of ammunition to Ukraine 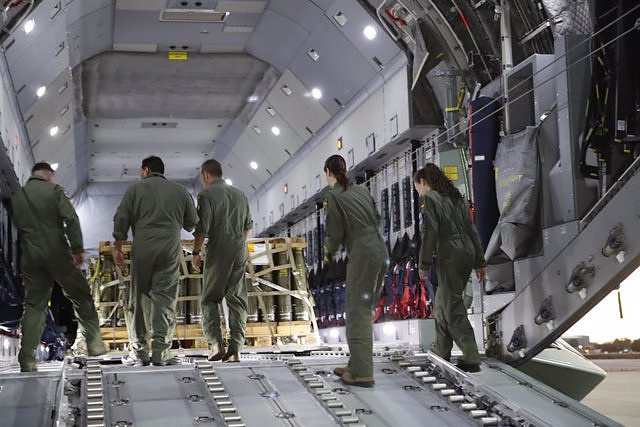 A new Air Force plane took off this Tuesday from the Torrejón de Ardoz air base in Madrid, loaded with large-caliber field artillery ammunition bound for Ukraine. It is the fifth flight with weapons to Ukraine that has departed from Spain in recent days.

It is a T-23 aircraft of the Air Force that has departed from Torrejón after being inspected before leaving by the Defense Minister herself, Margarita Robles, who has visited it before traveling to Cádiz to attend the commemoration events of the V Centenary of the first circumnavigation of the world, in which the King participates.

This is the fifth flight with weapons donated to Ukraine by Spain in recent days. Last week four flights departed from the Rota base (Cádiz), with the support of another NATO member country. These shipments add up to a total of 75 pallets of heavy caliber ammunition.

This Tuesday also, in response to an express request made by the Ukrainian Defense Minister, the Ministry of Defense has sent a truck loaded with medical supplies.

Likewise, in response to the urgent request of the Ukrainian authorities for material and uniforms for winter conditions, 20 trailer trucks have already left Spain with the material prepared by the Army during the month of August, ten of them have already arrived at Poland and ten others are in transit.

‹ ›
Keywords:
UcraniaFuerzas Armadas
Your comment has been forwarded to the administrator for approval.×
Warning! Will constitute a criminal offense, illegal, threatening, offensive, insulting and swearing, derogatory, defamatory, vulgar, pornographic, indecent, personality rights, damaging or similar nature in the nature of all kinds of financial content, legal, criminal and administrative responsibility for the content of the sender member / members are belong.
Related News