De Cos: "The economic outlook has recently been overshadowed by the escalation of the energy conflict"

Insists on an income pact between companies and workers to share "the inevitable decline in national income". 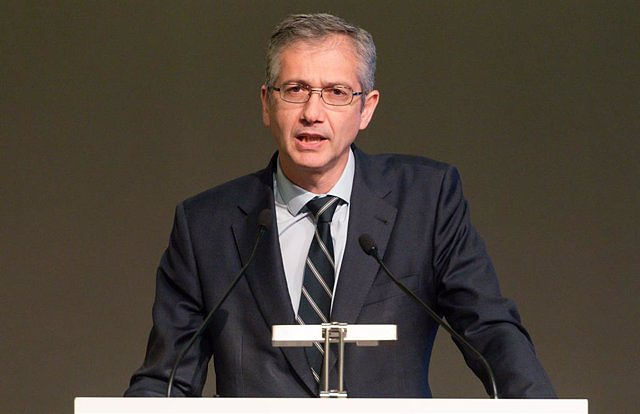 The Governor of the Bank of Spain, Pablo Hernández de Cos, warned this Monday that the economic outlook has "recently been overshadowed by the escalation of the energy conflict" with Russia, for which he has stated that the inflationary episode "is going to be more intense and lasting", while the outlook for economic growth in the euro area continues to moderate.

During his speech this Monday at the 'Joly Andalusia Forum', the governor warned that the most recent indicators in the euro area mark a "clear economic deterioration", as the effects of the full reopening of the economies fade. In addition, inflationary pressures are stronger than expected and are extended by spending items, accentuating the loss of purchasing power.

According to De Cos, it is expected that the effects of the reopening will be diluted and that the economy "slows down in the short term" due to the loss of purchasing power of households, the energy crisis, the weakening of global demand, the tightening of financial conditions as a result of the normalization of monetary policy and the context of notable uncertainty both in the economic and geopolitical spheres.

For all these reasons, the governor has insisted on the need to approach, within the framework of social dialogue, an income pact between companies and workers to share the inevitable decrease in national income that implies the increase in the prices of imported raw materials.

Thus, the governor considers that the behavior of business margins and wages is essential to avoid feedback that ends up generating an inflationary spiral. "To the extent that the current high inflation lasts, the probability of these second-round effects increases," he warned.

The governor has stressed that in an adverse scenario such as the current one, economic policies must play a fundamental role through the aforementioned income pact, selective support for the most vulnerable, determined supply policies, a firm commitment to sustainability fiscal and the reinforcement of the European project.

Fiscal policy should also play a relevant role in this context, according to the governor, who asks to avoid a generalized fiscal stimulus, since it would exacerbate inflationary pressures, and the use of automatic indexation clauses in spending items.

On the contrary, Hernández de Cos advocates focusing efforts on supporting lower-income households, which are the ones that suffer the most from the impact of inflation, and the companies that are most vulnerable to this new disturbance.

In addition, it has stressed that the measures implemented must be of a temporary nature, so as not to generate an additional increase in the structural public deficit. Its design must also avoid significant distortions in the signals provided by prices.

All this in a context in which the European Central Bank will continue to normalize monetary policy, although the governor has clarified that the pace and magnitude of this action will depend on the materialization of the risks to the medium-term inflation target.

"In any case, interest rates must reach a level that allows us to ensure a progressive convergence to our medium-term inflation objective and the speed at which we reach that level will be conditioned by the same objective," said the governor. .

In the financial markets, the process of normalizing monetary policy has been reflected in a significant increase in market interest rates.

Specifically, since the beginning of the year the 1-year Euribor has risen by more than 250 basis points, standing at 2.26%; and the 10-year OIS rate (which is usually used as a reference for risk-free interest rates at that term) has done so at around 210 basis points.

These increases have also been gradually transmitted to the cost of bank financing for companies and families. "This tightening of financial conditions will help contain inflationary pressures," she assured.

The governor has focused on the need to promote structural policies at European level that favor the integration and interconnection of European markets -particularly energy markets- and reinforce the single market "Not only will they allow greater resistance to disturbances , but will also result in an increase in competitiveness", he emphasized.

In this sense, it considers that joint financing mechanisms must be established to safeguard this common effort without excessively or very unevenly weighing down national public finances. As he explained, the existence of common funding would allow the European institutions to finance large-scale programs subject to a common quality standard and assess their compliance in a homogeneous manner.

In addition, the governor believes that "it is essential" to advance in the expansion of risk-sharing mechanisms --public and private-- in the EU.

In the first place, the governor believes that the EMU needs to equip itself with a permanent macroeconomic stabilization capacity, with tax and debt capacity, which complements the action of the single monetary policy. Secondly, he sees "essential" to complete the Banking Union, with the construction of a European deposit guarantee system. Thirdly, he has advocated advancing in the construction of the Capital Markets Union.

‹ ›
Keywords:
Banco De España
Your comment has been forwarded to the administrator for approval.×
Warning! Will constitute a criminal offense, illegal, threatening, offensive, insulting and swearing, derogatory, defamatory, vulgar, pornographic, indecent, personality rights, damaging or similar nature in the nature of all kinds of financial content, legal, criminal and administrative responsibility for the content of the sender member / members are belong.
Related News