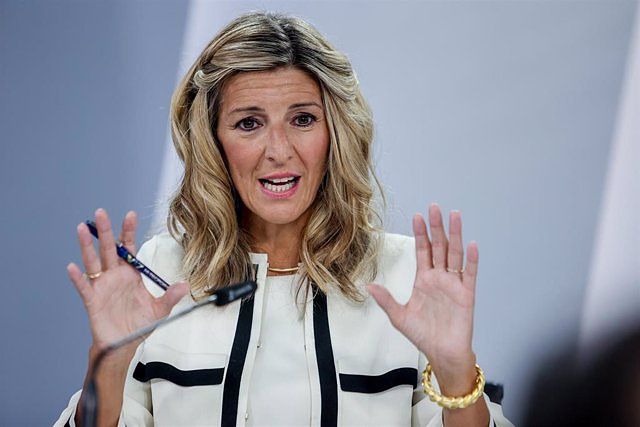 The second vice president and minister of Labor and Social Economy, Yolanda Díaz, has indicated this Tuesday that she will convene the social dialogue table in December to listen to the parties and take a position on the increase in the Interprofessional Minimum Wage (SMI), after knowing First, the analysis commissioned to the Advisory Commission and the final data of the annual average of the Consumer Price Index (CPI).

"Once they finish their tasks [the experts] and once we know the final data of the annual average of the CPI, we will convene, as we always do in December, the social dialogue table to listen to the parties and take a position," he said. the second vice president pointed out at the press conference after the Council of Ministers.

Díaz recalled that the Government convened last Friday the committee of experts so that, within a period of two and a half months, it determines the increase in the Minimum Wage, in a context now marked by the escalation of prices.

Although the advisory committee already prepared an analysis on this issue a year ago, Díaz explained that the mandate has now been extended to two more issues: one of them is that they carry out the calculations according to the updated data for 2022 and another is to have taking into account the conclusions of a report by the Bank of Spain, in which it alluded to the importance of the minimum wage in inequality and poverty.

Asked what would be the increase in the minimum wage that she would like, Díaz has replied: "The vice president cannot give her own opinions. What I would like... in short. The being and the should be," she pointed out.