Díaz asks for a basket of food with frozen prices that vary each week and last beyond Christmas. 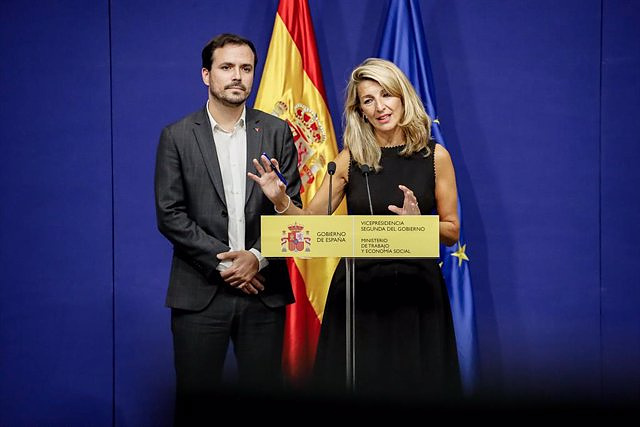 The Second Vice President and Minister of Labor and Social Economy, Yolanda Díaz, and the Minister of Consumption, Alberto Garzón, will meet this Monday with the heads of distribution companies and consumer associations to address their initiative to seek an agreement to cap prices of basic food products in the shopping basket.

After holding a first meeting last Thursday with the executive director of Carrefour Spain, Alexandre de Palmas, Díaz and Garzón plan to bring together representatives of large distribution and consumers in full debate on the proposal launched by the Minister of Labor to agree on a cap at the price of basic foods.

Díaz has already expressed his position on the subject, pointing out that the shopping basket of basic products with "frozen" or limited prices that he is demanding from large retailers must vary every week, include proteins and fresh products (fish, meat, fruit, eggs and vegetables) and be available to families at least until after Christmas. Likewise, he has requested that a specific basket for celiacs be offered.

In addition to being affordable and of quality and available at least until after Christmas, Díaz has stated that this basic shopping basket must be the result of an agreement between the large distributors, "rotate" weekly so that the diet is "varied and healthy" and quality.

The vice president has insisted that this demand is directed at the large distributors so that they launch this basket "at the expense of their business margins" and not of the producers. She has also indicated that it is not a proposal that is focused on small businesses, because "it does not have the capacity" to assume the cost.

"In no way can this offer be at the expense of the producers of our country, as required by the Food Chain Law. This is at the expense of the contribution that the companies that have the capacity to do so make or should make. The effort We ask the large distributors and not the small business, which does not have the capacity for this," he stressed.

This Monday's meeting with large distributors and consumer associations comes days after the second vice president held a first meeting with the executive director of Carrefour Spain, Alexandre de Palmas.

All this after the supermarket announced that it would make a shopping basket available to customers at 30 euros with 30 products, including food items commonly used in homes such as breakfasts, preserves, pasta, oil or coffee, along with a selection of drugstore, cleaning and perfumery items, among others.

"The current situation requires agile and effective measures. At this time, when each act of purchase is more valuable than ever, Carrefour responds to its customers: we work to offer savings solutions that protect the purchasing power of families in Spain", pointed out the executive director of Carrefour Spain, Alexandre de Palmas.

The basket with 30 products for 30 euros will be available from September 12 to January 8 in the Carrefour hypermarket network, Carrefour Market and online stores.

‹ ›
Keywords:
Alberto GarzónYolanda Díaz
Your comment has been forwarded to the administrator for approval.×
Warning! Will constitute a criminal offense, illegal, threatening, offensive, insulting and swearing, derogatory, defamatory, vulgar, pornographic, indecent, personality rights, damaging or similar nature in the nature of all kinds of financial content, legal, criminal and administrative responsibility for the content of the sender member / members are belong.
Related News