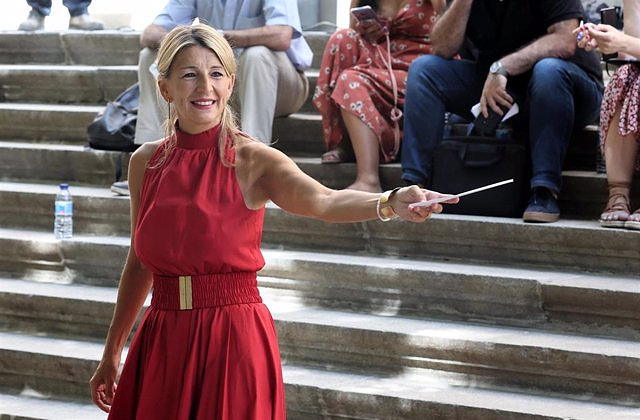 The Second Vice President and Minister of Labor and Social Economy, Yolanda Díaz, has advocated reaching an agreement with large retailers and consumers to cap the prices of basic foods.

In an interview granted to eldiario.es collected by Europa Press, the head of Labor has opted to reach an agreement with large distribution and consumers to cap the prices of a basket of basic products such as bread, milk, eggs or the fruit.

"There is nothing that stresses people's lives more than not being able to make the shopping basket, and this is happening in our country," says the Vice President of the Government, who blames "business margins" for part of the rise of prices. In this sense, she has pointed out that "someone" is getting rich along the way and is using war.

"The oligopolies in our country are not only in the banking or energy sectors, we have five large food distributors that account for 50%", pointed out the second vice president, who reported that the Executive has not yet met with these large distributors, but he has assured that he will do so.

In a scenario of prolonged price escalation, Díaz has pointed out that "wages are victims of inflation, they are not the cause of it."

On this point, the second vice-president has reiterated that the unions "are right" in terms of their salary claims and are defending the general interest. "When the Spanish employers are right, I have given it to them. And when the unions have good ideas, I also give it to them", she has defended herself.

He has thus reiterated to the social agents that they return to the negotiating table. "The Spanish employers have to be up to the task: they have to revalue wages. Only 450 collective agreements were registered in July, which indicates that the negotiation of these agreements is being blocked and this is bad for our country", has lamented.

The Minister of Agriculture, Fisheries and Food, Luis Planas, in an interview published this Sunday by Europa Press, ruled out imposing a tax on the distribution sector, but asked for responsibility so that the rise in prices is "as limited as possible" , while considering that setting a minimum price on essential goods and food products is neither legally possible nor "desirable".

Regarding the possibility of a tax on distribution, as claimed by his government partner United We Can, Planas affirmed that the taxes applied to the financial and energy sector "are full of logic", although this is not the case with distribution.

"I don't think that is the case, at the moment, with distribution, at least until now, I want to say that all the elements of the chain, including distribution, have behaved correctly. I hope it will do so in the immediate future as well." "said the Minister of Agriculture.