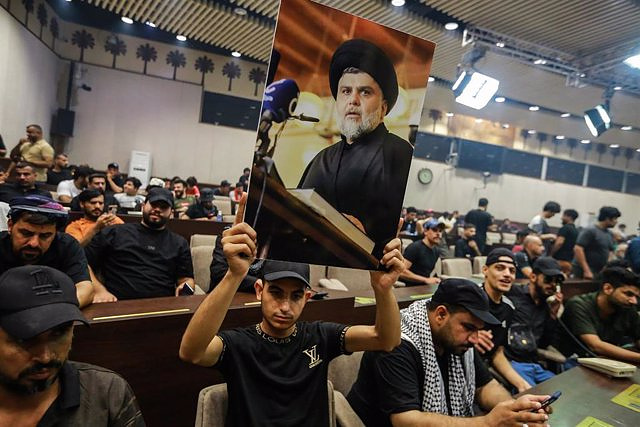 A multitude of demonstrators have joined the protests this Sunday in what is already the second day of occupation of the Iraqi Parliament headquarters by sympathizers of the coalition led by the cleric Moqtada al Sadr.

The new protesters have arrived in the capital by the hundreds from the majority Shiite areas of Iraq such as Kerbala and Najaf, according to the activists themselves.

Al Sadr himself has summoned the Iraqi population to take advantage of this "golden opportunity" to achieve real changes after this "spontaneous and peaceful revolution that has liberated" the Green Zone. "It is a great opportunity to achieve a radical change in the political system," Al Sadr said on Twitter.

Thus, he has called on the tribes, the security forces and the powerful Popular Mobilization Units to join the revolt. "Dear people, rise up to demand reforms (...). I ask everyone to support the pro-reformist revolutionaries," he snapped.

Al-Sadr supporters stormed parliament for the second time this week on Saturday -- after Wednesday's invasion -- to protest the candidacy of pro-Iranian Shiite politician Mohamed al-Sudani as prime minister.

The Parliament is located in the Green Zone, the fortified part of Baghdad where the headquarters of the main Iraqi institutions and foreign embassies are located.

A total of 125 people, including 25 members of the Iraqi security forces, were injured during the day on Saturday, but this Sunday there is no news of personal injury. The demonstrators have confirmed this Sunday that the security forces are inside Parliament, although they are not armed to avoid incidents.

Meanwhile, the Coordination Framework coalition that supports Al Sudani has announced the suspension of the demonstrations that it had called "until further notice" to give room for negotiations for a political solution to the crisis.

The Sayirún coalition led by Al Sadr was the most voted in the elections last October. In it they participate from Iraqi nationalists to communists and won 73 of the 329 seats at stake. However, Sayirún deputies walked out of Parliament in June in protest at the lack of solutions to the political crisis.

‹ ›
Keywords:
Irak
Your comment has been forwarded to the administrator for approval.×
Warning! Will constitute a criminal offense, illegal, threatening, offensive, insulting and swearing, derogatory, defamatory, vulgar, pornographic, indecent, personality rights, damaging or similar nature in the nature of all kinds of financial content, legal, criminal and administrative responsibility for the content of the sender member / members are belong.
Related News