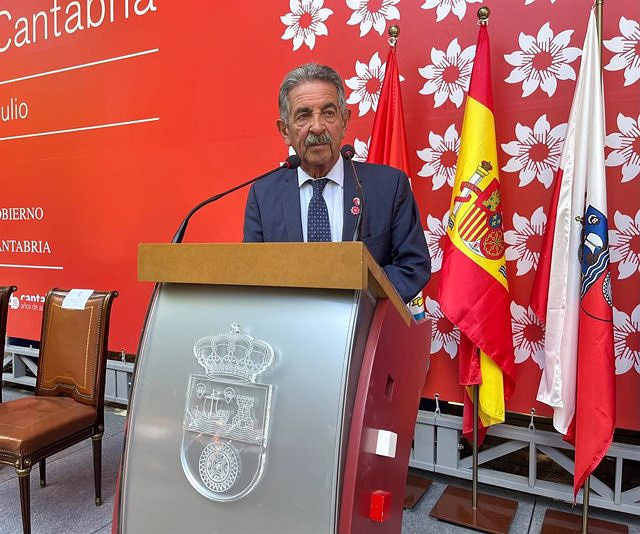 The Popular Party, Citizens and Vox have charged this Friday against the president of Cantabria, Miguel Ángel Revilla, for his idea to change the official anthem of the autonomous community for the song 'Wind from the North', by Nando Agüeros, replace that of 'The mountain'.

From the PP of Cantabria they consider it a "joke" and "lack of respect" for the region and its citizens, an issue that "is only in the head" of the regionalist and "nobody else worries".

This was said this Friday by the parliamentary spokesman for the 'popular', Iñigo Fernández, at a press conference called as a result of the news that Revilla declared on Thursday in Asturias, at the closing of the IV Hispanic American Meeting held in Colombres, that he will propose in the Chamber that the song 'Viento del Norte', by the Cantabrian Nando Agüeros, be the regional anthem.

Therefore, they have assured that they will not enter the bottom of the debate or in that "game". Instead, they have asked the PRC-PSOE chief executive that, with less than a year to go before the end of the legislature, "start governing once and for all", instead of being "partying": "The Cantabrians expect from their president something more than dedicating himself to singing".

The PP deputy has considered that it is an "unfortunate" proposal, "inopportune" and "about which nobody talks". He has thus criticized the approach, made "as if it were the most important issue and that most worries society", and has branded it as "surprising" and even a "joke" in a context marked by "unleashed inflation", for above 10%, and before an "economic horizon full of clouds".

For its part, Ciudadanos Cantabria considers it "sterile" and point to "a strategy of the chief executive to cover up the economic problems that lie ahead."

"This controversy that Revilla now puts on the table is sterile. There are more important things in Cantabria to worry about the anthem now," said the coordinator of Cs, Félix Álvarez, after the news.

The orange spokesman in the regional Chamber believes that "it is not so simple" to approach it so that it is endorsed, as the regionalist would claim, because "it requires debate and modification of the law of symbols".

The spokesman for the mixed group-Vox in the Parliament of Cantabria, Cristóbal Palacio, has branded the regional president's "intention" as a "nationalistic occurrence". "The PRC, at a time of collapse as a party, with this type of incident incurs an attempt at institutional rupture, with maneuvers such as introducing said song at the end of any act organized by the Government," Palacio criticized.

"Now it is not time to talk about the anthem," Palacio has settled, to add that "the signs approved and peacefully assumed by the population for 40 years identify all the mountaineers." In his opinion, Revilla's claim "is similar to the nationalist maneuvers of the Basque Country and Catalonia."

‹ ›
Keywords:
PPCiudadanosMiguel Ángel RevillaVOX
Your comment has been forwarded to the administrator for approval.×
Warning! Will constitute a criminal offense, illegal, threatening, offensive, insulting and swearing, derogatory, defamatory, vulgar, pornographic, indecent, personality rights, damaging or similar nature in the nature of all kinds of financial content, legal, criminal and administrative responsibility for the content of the sender member / members are belong.
Related News