Covite says that "the only hired killers have been the ETA members and their accomplices, many of them today in EH Bildu" 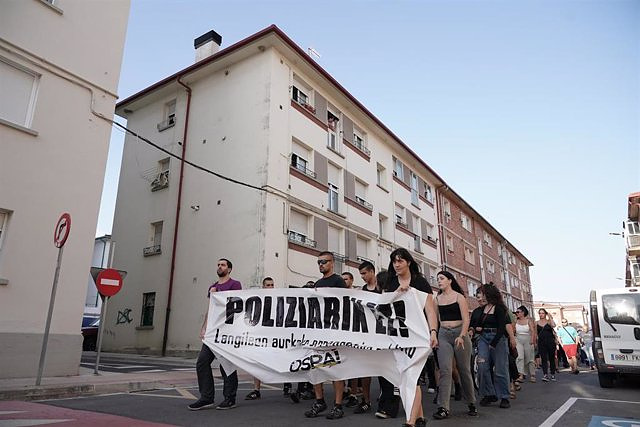 The Collective of Victims of Terrorism, Covite, has thanked the State Security Forces and Bodies for the work carried out in the past and has warned that "the only paid assassins have been the ETA members and their social and political accomplices". "Today many of them hold positions at EH Bildu, formerly Herri Batasuna", he added.

In social networks, the group has referred to the celebration this past Saturday in the Navarran town of Alsasua of the so-called 'Ospa eguna', and has stated that "the objective of this sinister day is to utter all kinds of insults and disqualifications to the Forces and State Security Corps and demand their expulsion from Euskadi and Navarra".

"Assassins for hire, they called them. Pure hatred and fanaticism," lamented Covite, who criticized the fact that before the demonstration a talk against the FCSE was held in a municipal space of the City Council. "Unfortunate that public spaces are given up to spread hate speech and fascination with violence," he added.

In this sense, Covite has warned that "the only 'hired killers' have been the ETA members and their social and political accomplices". "Today many of them hold positions at EH Bildu, formerly Herri Batasuna", he added.

Lastly, he stressed that the group of victims will always be grateful to the State Security Forces and Bodies "for their great work to protect us from the hatred and intolerance of ETA's environment".

‹ ›
Keywords:
BilduETATerrorismo
Your comment has been forwarded to the administrator for approval.×
Warning! Will constitute a criminal offense, illegal, threatening, offensive, insulting and swearing, derogatory, defamatory, vulgar, pornographic, indecent, personality rights, damaging or similar nature in the nature of all kinds of financial content, legal, criminal and administrative responsibility for the content of the sender member / members are belong.
Related News