Congress reopens its doors coinciding with the anniversary of the Constitution

Visitors will be able to see the recently restored façade of the lions and a permanent exhibition in the basement of the hemicycle. 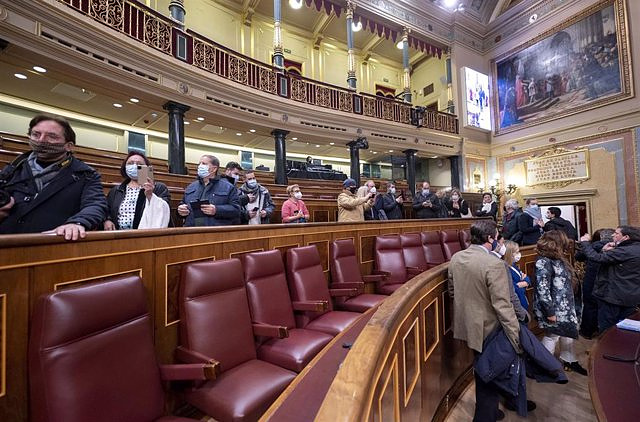 The Puerta de los Leones del Congreso will reopen on December 2 and 3 to receive citizens, this time on the eve of the 44th birthday of the Spanish Constitution of 1978. This is the twenty-fifth edition of the Open Doors Days of the Lower House, an event that was inaugurated in 1997 under the mandate of the then president of the institution, the 'popular' Federico Trillo.

The famous bronze door is only opened for citizens to enter, or in solemn acts presided over by His Majesty the King, such as the opening sessions of the General Courts of each Legislature.

This year, visitors will be able to see the newly restored Palace façade. On the portico supported by six Corinthian-style columns, visitors will enjoy one of the largest sculptural ensembles of the Spanish 19th century: the frontispiece of the Palace, made up of classical-style figures that idealize Strength, Justice, Courage and Science, among other concepts.

The citizens, who will be able to parade through the parliamentary headquarters between half past nine in the morning and seven in the evening, will begin the tour through the Isabel II Lobby, where they will be able to contemplate a copy of the Constitution of 1812, elaborated by the Cortes from Cádiz, and guarded by the Carrara marble statue, the work of Josep Piquer i Duart, of the monarch who inaugurated, in 1850, the Palacio de las Cortes.

In the Hall of Lost Steps, visitors will see the vault with four allegories, the work of Vicente Camarón, and the medallions that represent the most relevant politicians of the 19th century, and then they will go to the chamber where, in addition to chatting with the deputies who move to the place, they will be able to sit in the seats of their favorites.

They will also have time to observe the decoration of the vault, the fan skylight that lets in natural light, the two large paintings located on both sides of the Presidency, 'The oath of the Cortes of Cádiz', and 'María de Molina presenting to his son before the Courts of Valladolid', the caryatids and the great effigies of the Catholic Monarchs.

Already on the first floor of the Palace, visitors will enter the Mariana Pineda Room, where the Board of Spokespersons meets, to see the painting 'Mariana Pineda in Chapel', the work of Vera Calvo, and will be able to tour the portrait gallery , a historical journey through the presidents of the Congress of Deputies painted by some of the most relevant artists of the 19th and 20th centuries.

To conclude the visit, citizens will be able to go down to the new space set up in the basement of the Palace, which premiered at the 2021 Open Doors with an exhibition on Clara Campoamor for the 90th anniversary of women's suffrage, and which from this month of December will host a permanent exhibition on "Democracy, Parliament and Constitution".

The entrance and the complete route of the visit will be accessible. The Spanish Confederation of Families of Deaf People (FIAPAS) will make individual magnetic loops available to the Congress of Deputies to provide people who use hearing aids with the guides' explanations.

People who wish to use this service will have to request it from the FIAPAS Accessibility Support Service technicians, who will be on those days at the visitor entrance from 9:30 a.m. to 7:00 p.m.

This collaboration is part of the Agreement signed between the Congress of Deputies and FIAPAS to make deaf people aware of the activities carried out in the Lower House, as well as to provide accessibility to the documentation that this institution produces on general interest.

The website and the profiles of the Congress in social networks (Twitter, Facebook, Instagram and YouTube) will serve as a platform for the broadcast of the audiovisual signal of the Conference in streaming and also content specially prepared for these days dedicated to discovering curiosities of the history and heritage of Parliament.

The virtual tour that allows each user to enter the Palace on a personalized guided tour in augmented reality is also available on the Congress website. This tour gives the option of going through the different rooms, observing the environment in 360 degrees, getting closer to contemplate even the smallest detail of each room, finding information about each of the works of art that make up the artistic heritage of the Congress and listening explanations provided by your virtual guide.

The visit can also be done in augmented reality with VR (Virtual Reality) devices, and is accessible to people with disabilities. The use of VR glasses allows users with movement limitations to move around the rooms and navigate through all the elements that provide additional information by fixing their gaze on the point they want to access.