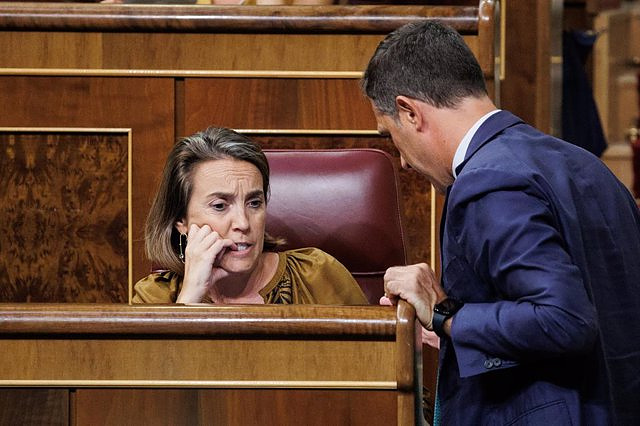 The plenary session of the Congress of Deputies will debate on Tuesday the PP proposal to adjust the first three sections of the Personal Income Tax (IRPF) to inflation, temporarily set a new exempt personal minimum and update the withholding table.

Thus, for the first plenary session of the new session after the holiday break, the 'popular' have decided to put to a vote in the Chamber one of the fiscal measures proposed to the Government to face the price crisis.

Its parliamentary spokesperson, Cuca Gamarra, defended the initiative at a press conference this week as "a serious, effective and immediately applicable proposal" to protect citizens' income.

With their initiative, registered at the end of last July and collected by Europa Press, the 'popular' claim to deflate personal income tax by adjusting at least the first three sections -up to income of 40,000 euros, said Gamarra-, establish a new personal minimum of temporary character, which decreases as income increases, and update the withholding table.

In its initiative, the PP recalls the different attempts to carry out this measure, including a bill that was not debated due to the Government's veto -- it has the power to reject any initiative that reduces its income or involves more spending than budgeted -- and a motion for a resolution at the latest State of the Union Debate.

In this case, the proposal of the 'popular' was rejected with the vote against the PSOE and United We Can and the abstention of the PNV, something that he considers "surprising" in the case of the majority partner of the Government, highlighting that in the Basque Country and Navarra, where they govern, have announced similar measures.

"We cannot understand that what the PSOE and the PNV want for the 2.2 million residents in the Basque Country are denied to the more than 44 million Spaniards who reside in the rest of the communities of the common regime", they hoist from the PP, who see in this difference "a clear discrimination between some people and others based on where they reside and, worse still, the partisan interests of the Government".

‹ ›
Keywords:
AEATPPMinisterio De HaciendaDeclaración De La RentaCongreso De Los Diputados
Your comment has been forwarded to the administrator for approval.×
Warning! Will constitute a criminal offense, illegal, threatening, offensive, insulting and swearing, derogatory, defamatory, vulgar, pornographic, indecent, personality rights, damaging or similar nature in the nature of all kinds of financial content, legal, criminal and administrative responsibility for the content of the sender member / members are belong.
Related News