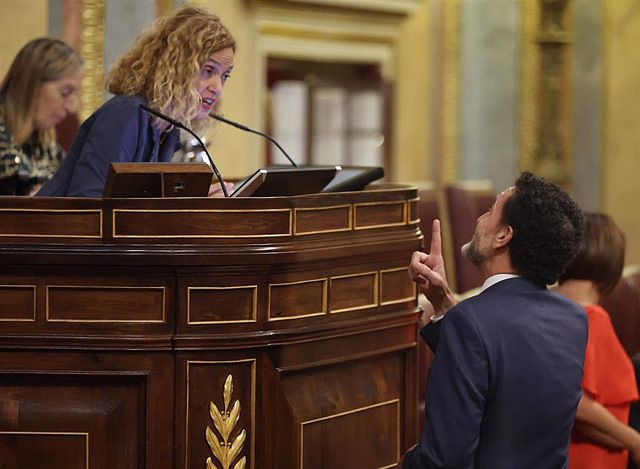 Ciudadanos has accused the Presidency of Congress of applying a "double yardstick" and of falling into "partisanship" by censoring some expressions or "insults" uttered in the chamber but not demanding the withdrawal of others and has demanded that the Bureau chaired by Meritxell Batet to set "neutral and clear criteria" so that the speakers know what to expect and avoid "arbitrariness".

After the episodes experienced in the last two plenary sessions, the president of the party, Inés Arrimadas, has addressed a letter to the Governing Body of the Chamber, collected by Europa Press, in which she requests that "a list of neutral criteria and clear by which the Presidency of the Chamber can really order the participants to withdraw expressions, vexations and insults that they may have poured".

In his letter, Cs denounces that while this Tuesday, when the socialist Alfonso Rodríguez Gómez de Celis held the Presidency, the Vox deputy Patricia Rueda withdrew the word for calling Bildu "filoetarra", this Wednesday Batet has allowed the Minister of Equality, Irene Montero, to accuse the PP of "promoting the culture of rape", without "even demanding the withdrawal of these very serious accusations". Of course, Batet has ordered those words to be 'deleted' from the Session Journal.

For all these reasons, "given the importance of maintaining a political debate in equal conditions for the forces that support the Government and those that exercise the opposition, and because of the responsibility that the Presidency of the Chamber has in this regard", Ciudadanos claims that objective criteria for action are set, clarifying "what is admissible and what is not in the Chamber".

‹ ›
Keywords:
CiudadanosMeritxell Batet
Your comment has been forwarded to the administrator for approval.×
Warning! Will constitute a criminal offense, illegal, threatening, offensive, insulting and swearing, derogatory, defamatory, vulgar, pornographic, indecent, personality rights, damaging or similar nature in the nature of all kinds of financial content, legal, criminal and administrative responsibility for the content of the sender member / members are belong.
Related News