Chile rejects the new Constitution with a large majority

The Electoral Service of Chile (Servel) has reported that, according to preliminary data, the 'rejection' of the referendum on the draft of a new Constitution has prevailed over the 'approval' with a large majority. 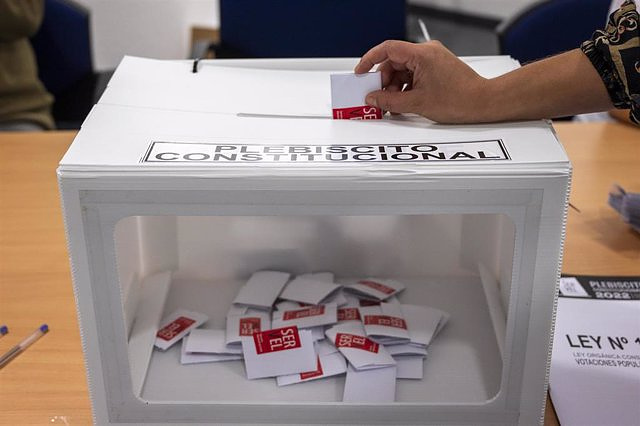 The Electoral Service of Chile (Servel) has reported that, according to preliminary data, the 'rejection' of the referendum on the draft of a new Constitution has prevailed over the 'approval' with a large majority.

The Servel has detailed that in the 16 regions of the country the 'rejection' option has been imposed, while the 'approval' option has won only abroad, results that the Servel incorporated into the system at first due to the time difference .

The Chilean president, Gabriel Boric, has summoned the political parties to debate the continuity of the constitutional change process, regardless of the winning option.

Among the political parties in Chile, whether on the left or right, there is a political consensus that a new Magna Carta must be carried out that eliminates the Constitution of former dictator Augusto Pinochet, and that it be elected by the citizens.

The closing of tables in the electoral colleges of Chile occurred at 6:00 p.m. (midnight in Spanish peninsular time), at which time the official vote count began.

More than 15 million Chileans have been called to participate in this process in which voting is compulsory for the first time in 13 years, including Chileans residing abroad. Therefore, participation in this plebiscite is considered historic.

Voters have responded to this question: "Do you approve the text of the New Constitution proposed by the Constitutional Convention?"

According to the proposed text, the State of Chile would be considered as "plurinational", contemplates the right of indigenous populations to express an opinion on matters that affect them and puts in writing rights on abortion --without expressly naming it-- or in terms of housing.

The reforms would also extend to some of the main institutions, with a structural change in the judicial system and the disappearance of the Senate, reconverted into a House of Representatives in the event that the "approval" wins.