CGPJ does not open disciplinary file to the president of the TSJCyL, who compared the PCE with the Nazi party

He understands that the magistrate only expressed a "personal opinion" as a free citizen in a media outlet. 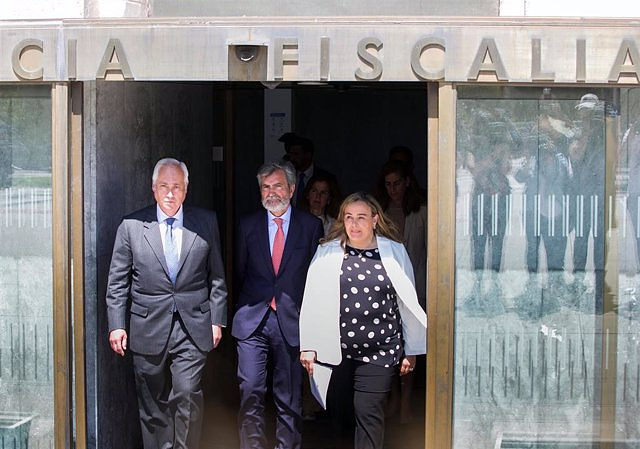 The General Council of the Judiciary (CGPJ) has decided not to open disciplinary proceedings against the president of the Superior Court of Justice (TSJ) of Castilla y León, José Luis Concepción, who compared in an interview the Communist Party of Spain (PCE) with the party Nazi, understanding that he limited himself to expressing "his personal opinion" as a "free citizen".

"He limits himself to expressing a personal opinion," the promoter of the Disciplinary Action of the CGPJ, Santiago Senent, points out in his informative diligence, collected by Europa Press, who recalls that the magistrate himself during the interview in the Diario de Burgos - dated on June 5 and 6 of this year-- states that "he issues his opinions as a free citizen".

In its diligence, the CGPJ also recalls that "the members of the judicial career, as citizens, enjoy the right to freely express their ideas and opinions, without prejudice to the duties of discretion and reserve that they must observe in those cases in which related to matters submitted to its jurisdiction".

And he stresses that judges and magistrates "are not deprived of their constitutional right to freedom of expression", so in this specific case, "their words may be more or less pleasing, and like any opinion it may be considered timely or inappropriate, but as long as they are not prohibited --by the disciplinary regime--, it is a legitimate use of a fundamental right".

After analyzing the complaint from the FAI-RADE association, which brings together lawyers with left-wing ideology, and the petition from the member of the CGPJ Concepción Sáez -- who requested that "government and disciplinary measures" be adopted against the president of the TSJ of Castilla and León--, the governing body of the judges emphasizes that in the present case there are only manifestations of "a personal opinion about a certain political party."

"As far as the present case is concerned, the statements made by the president of the TSJCYL (...) constitute a personal opinion about a certain political party but without directing it to any of the passive subjects of article 418.3, that is, nor to authorities, powers or officials or corporations," he explains.

Thus, it indicates that "the budgets of lack of discipline do not occur and in sanctioning law there is no room for extensive interpretations of the types".

The FAI-RADE association denounced the magistrate before the CGPJ after he assured in an interview with 'El Diario de Burgos' that Adolf Hitler's National Socialist Party "also came to power through the ballot box in Germany in 1933". "And we must not remember the consequences that his victory brought about," he added, when asked specifically about the Communist Party, integrated into the coalition government led by Pedro Sánchez.

FAI-RADE considered that these statements by Concepción could lead to the opening of a sanctioning file that would lead to the imposition of a serious or very serious sanction, according to the letter of the complaint, to which Europa Press had access.

Specifically, the association considered that the president of the Castilian-Leonese TSJ could have incurred in the loss of his political neutrality and in a repeated provocation of "serious" clashes with the Government "for reasons unrelated" to his position, before accusing him of ignoring the calls for attention from the president of the CGPJ, Carlos Lesmes, who had already warned him that the law prevents judges from congratulating or censuring the authorities.

For Elena Vázquez, president of FAI-RADE, Concepción's statements in that interview were made, "without a shadow of a doubt", within "his functions" as president of the TSJ, "not as a citizen who gives his opinion using his freedom of expression on any subject.

The position of his institutional position forces him, in the opinion of this association of lawyers, to "keep respect for all citizens, including those who organize themselves in political parties created under the protection of the law and subject to the Constitution."

According to FAI-RADE, Concepción's words, comparing the Spanish communists with the German Nazis, are a "clear animosity" towards the PCE, a "totally democratic" party and which is part of the Government of Pedro Sánchez through United We Can . And he recalls that the former Secretary of State for the 2030 Agenda, Enrique Santiago, is the secretary general of the formation.

"It cannot be considered freedom of expression, from an institutional position within the Judiciary, to be untrue and insult and slander an entire political organization that was also a key player in the fight for democracy in our country. the PCE to bring democracy to Spain do not deserve institutional declarations such as those cited", they reproach.

The member of the CGPJ Concepción Sáez asked for her part the governing body of the judges to take "government and disciplinary measures" against the president of the TSJ of Castilla y León.

Sáez requested, as he did "unsuccessfully several months ago, that the governmental and disciplinary measures contemplated" in the legal system "be adopted by the Permanent Commission of the CGPJ and its president, consistent with the seriousness and significance of the repeated and unjustifiable behavior audience" of Concepción for his statements.

Concepción himself already made some statements in 2021 that were also denounced by the same member, in which he assured that the presence of communist politicians - on the part of United We Can - in the Sánchez Executive put "in solfa" democracy. For Sáez, those were "unacceptable" statements by a person with the responsibility of a judge.

The member also explained that the CGPJ had already had to examine "the public conduct" of the magistrate when he criticized before the media the use by the Spanish Government of the state of alarm as a result of the COVID-19 pandemic. On that occasion, Lesmes sent him a letter asking for prudence and restraint.