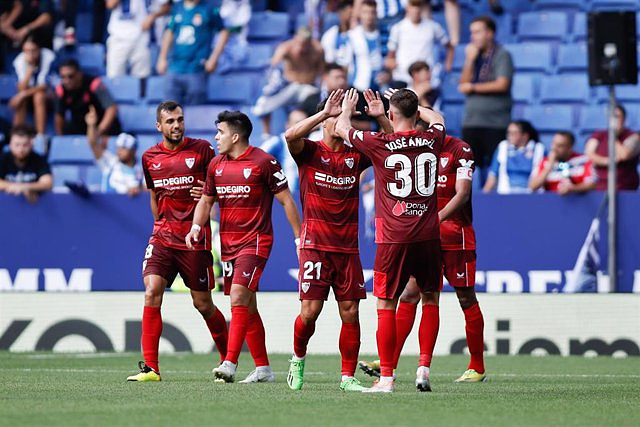 Sevilla, with a stellar José Ángel Carmona, has opened its victories against RCD Espanyol (2-3), in a fifth day of LaLiga Santander in which Rayo Vallecano won again at home nine months later by beating Valencia in a great set-piece game (2-1).

Julen Lopetegui's team, who trailed a draw and four defeats -including the 'Champions' against Manchester City- at the start of the course, calmed things down in Nervión in an excellent game by the youth squad, who in his debut as a starter he scored a brace and assisted Erik Lamela on the goal that sparked hostilities.

Only a minute had passed since the initial whistle when the Argentine opened the account by surprising Álvaro Fernández with a shot that slipped under his legs. Before half an hour, Carmona caught a rebound to increase the lead (min.27), and himself, after a shot by Joselu at the post, seemed to sentence the game with his second goal in particular (min.45).

However, the parakeet team reacted before the interval after a hand inside the area by Acuña that allowed Joselu to make it 1-3 from eleven meters. Already in minute 62, Braithwaite, with his second goal as a blue and white player, made the RCDE Stadium believe with the comeback, but Sevilla, who still suffered the expulsion of Lamela and Lopetegui, withstood the local onslaught.

In Vallecas, Rayo celebrated the first victory in their fiefdom since December 18, 2021 by beating Valencia thanks to two strategic actions, which allowed Andoni Iraola's men to interrupt a streak of two consecutive losses and reach seven points.

The red-and-red squad, demanding in terms of pressure, soon found a prize in a lateral free kick after four minutes that Trejo kicked and that Isi Palazón took advantage of to send the ball to the bottom of the net. The advantage at the break could have been greater, but Mamardashvili acted to block first a one-on-one by Trejo and the next shot by Álvaro García and later a powerful shot by Camello.

The same protagonists of the first goal participated in the 2-0 after the restart, in which Nico González ended up introducing the ball into his own goal when he tried to clear (min.52). Gennaro Gattuso's men managed to close the gap, also from set pieces, in added time with a header from Diakhaby after a free kick, but they could not avoid the third defeat of the season.

‹ ›
Keywords:
VallecasRCD Espanyol
Your comment has been forwarded to the administrator for approval.×
Warning! Will constitute a criminal offense, illegal, threatening, offensive, insulting and swearing, derogatory, defamatory, vulgar, pornographic, indecent, personality rights, damaging or similar nature in the nature of all kinds of financial content, legal, criminal and administrative responsibility for the content of the sender member / members are belong.
Related News