He assumes the sacrifices that being king will entail and designates his firstborn Prince of Wales. 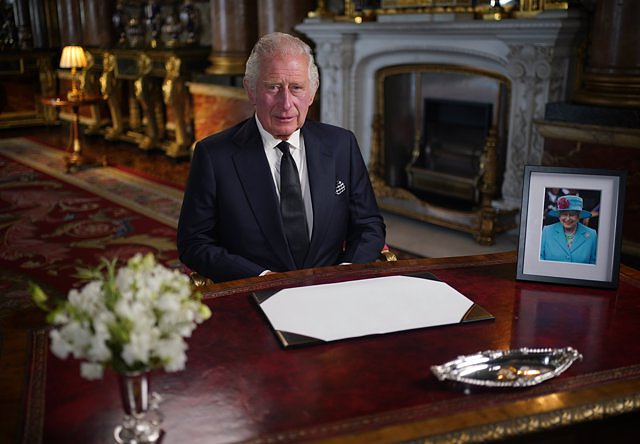 King Carlos III has highlighted that his mother, Elizabeth II, had "a life well lived" and, with "pain" for the loss and "gratitude" for his mother's dedication during seven decades of reign, has renewed the commitment to for the life she assumed upon ascending the throne.

With the "inspiration" and "example" of the late queen, Carlos III takes the reins of a palace that, as he recalled, is a point of reference not only for the United Kingdom but also for the Commonwealth as a whole.

The new monarch, who has thanked the expressions of condolences and support, has remembered his mother as an "inspiration" and an "example" both for the family and for the citizenry as a whole, in a historic first speech to the nation in the one who has spoken next to a framed photograph of Elizabeth II.

Carlos III has emphasized that the world has changed in 70 years, from the post-war years to the present, but has advocated keeping values ​​constant and has pointed out that "the duties of the monarchy also continue", now with him at the helm.

Isabel II lived "times of joy" and also "times of sadness" within a "life of service" that has earned her, according to her son, the "admiration" and "respect" of millions of people. "I share this feeling of enormous loss with all of you," she said.

Likewise, he has alluded to the famous speech delivered by his mother from Cape Town in 1947, when he promised to dedicate his life, "short or long", to the service of the people. "It was more than a promise, it was a deep personal commitment that defined her entire life," she added.

The new king has made the message his own assuming that he has a lifetime position -- "for as long as God keeps me alive" -- and for which his life is going to change radically. He has had words of affection for his "dear" wife, the queen consort Camila, and has thanked her for her loyalty: "I know she will be up to the new demands."

He has also alluded to his eldest son, Prince William, first in line to the throne, and has formally confirmed the transfer of the Duchy of Cornwall. The heir will also be Prince of Wales, as his father has decreed in this speech.

In his message, Carlos III has included mentions of Guillermo's wife, Catalina, and has underlined his "love" for his young son, Enrique, and for his wife, Meghan Markle, in a symbolic gesture of support after a turbulent last year within the royal family.

Carlos III's first speech to the nation concluded with words of closeness to his "dear mother". "As you begin your last great journey to join my dear dad, I just want to say this: thank you."

"Thank you for your love and devotion to our family and to the family of nations that you have served so diligently over the years. May the angels in their flight take you to rest," he concluded.