Carlos Alcaraz will fight for the US Open and number one 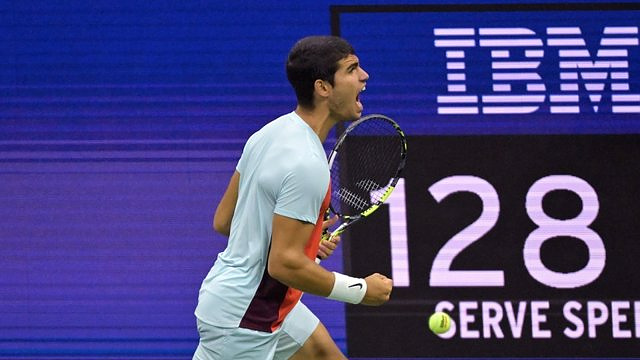 The Spanish tennis player Carlos Alcaraz will fight this Sunday to conquer his first 'big' and become the new number one in the world after winning this Friday in the semifinals of the United States Open, fourth and last 'Grand Slam' of the season, American Frances Tiafoe in five sets (6-7, 6-3, 6-1, 6-7, 6-3).

At 19 years old, the Murcian became the youngest to reach a 'Grand Slam' final since his compatriot Rafa Nadal did it in the 2005 edition of Roland Garros and the youngest to do so in Flushing Meadows since 1990 ( Pete Sampras). Now, he will try to add his first 'great' against the Norwegian Casper Ruud, who will also try to debut his 'Grand Slam' record and who is also opting for the world throne.

And all after coming out on top in a third 'battle' in the Arthur Ashe against a rival who didn't give up, not even when he seemed lost after being overwhelmed in the third set and being down in the fourth. But the American reacted and forced the player from El Palmar to show nerves of steel again, as in the round of 16 against the Croatian Marin Cilic and in the quarterfinals against the Italian Jannik Sinner.

Alcaraz needed four hours and 20 minutes to end the resistance of the local tennis player, who was seeking to end the 13-year drought of a finalist from his country in a 'Grand Slam' (Andy Roddick at Wimbledon 2009). The Murcian finished with 59 winners, some of them of an impressive level, and 37 unforced errors, the vast majority in the first set, and will fight for a 'great' that escaped his coach Juan Carlos Ferrero in 2003.

Right from the start Tiafoe showed that his presence in the semi-finals was not the result of chance. He accepted the challenge of playing at a high pace that the Murcian proposed and withstood his onslaughts and his serve well, especially when he connected the first. He hardly lost points like that, but neither did Alcaraz, only two, in a heat with few options for the rest.

In fact, there were only three, two in the seventh game thanks to a 15-40 for the third seed, who lacked a little more nerve to have taken advantage of them, and one, but also a set ball, for the American , but that saved the Spanish to finally reach a 'sudden death' where he was too erratic. His third double and sixteenth unforced error handed the set to Tiafoe.

The 16 winners of Alcaraz did not have much prize on the scoreboard due to his mistakes, but he knew how to correct it in the second set, without slowing down the game and with the American without leaving too many gaps in a duel where points of a lofty level that ended up 'warming up' the crowded Arthur Ashe.

The one from El Palmar had to save a dangerous breaking ball at the beginning and finally found the reward for his insistence and aggressiveness in the sixth to break his rival's serve and get ahead for the first time. With some suffering, with bad decisions to waste two set points at 5-2 and trouble in his last two serves, Alcaraz received a shot of energy with the second set.

On the other hand, the twenty-second seed did not sit well with the loss of the set and entered a tennis 'black hole'. The Murcian grew up, raised a 'wall' from the bottom of the court and his rival was unable to find his shots (12 unforced errors) to give up the set 6-1, with only nine points won (two to the rest) and see each other for the first time in this entire US Open on the brink of the abyss.

It was time to see if the 19-year-old was capable of sustaining the pressure and not giving up a fifth set. In his favor was an apparent greater freshness than that of the American, despite the fact that he reached the semifinal with more than two and a half hours less of tennis in his legs and without a beating of more than five hours like the one the pupil had had by Juan Carlos Ferrero in the quarterfinals against Sinner.

Alcaraz did not want to waste his moment and broke early in a game that seemed controlled by the American. Then, with the support of Arthur Ashe, Tiafoe reacted with winning shots and sharp returns and was able to return this break, and a second one made by the Murcian to even the set (3-3). The Spaniard held up well, wasted a match point along the way with one, perhaps, unnecessary left and his risks in the 'tie-break' made the American believe.

The American and the public also raised the 'break' in the first game that the third seed achieved, but he also showed that his head works and responded immediately to recover an advantage that was gold. He didn't have to wait to do it on his serve, he sealed his bye to the return final, with strokes of genius to further his dream in New York.