Carlos Alcaraz: "This is something I've dreamed of since I was a child" 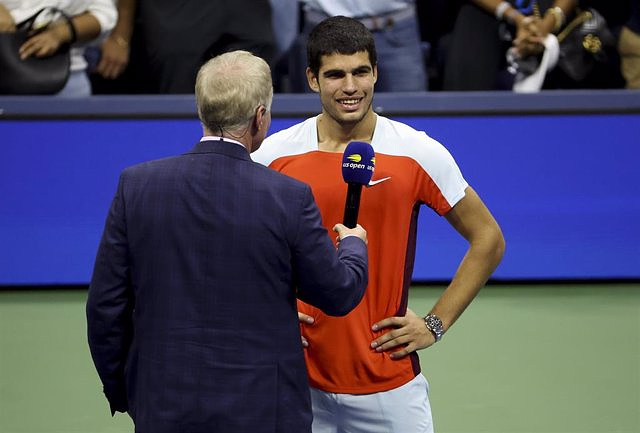 The Spanish tennis player Carlos Alcaraz made it clear that his triumph in the United States Open, his first 'Grand Slam', and his rise to number one in the world were things he had "dreamed of since he was a child" and that given his youth it was something "really special".

"This is something I've dreamed of since I was a kid, to be number one in the world and a Grand Slam champion. I've worked so hard and now it's hard to talk, there are so many emotions. I'm only 19 years old and it's something really special to me," Alcaraz said before receiving the winner's trophy from John McEnroe.

The Murcian stressed that despite reaching the final after three tough five-set matches in a row, "he always" tells himself that "in the final rounds of a 'Grand Slam' is not the time to be tired." "You have to give everything on the track, everything you have inside," he added.

The 19-year-old from El Palmar especially remembered his mother and grandfather. "I have been thinking about them. My family is here, but many have not been able to come," he said. "Many people have come to see me and cheer me on on this very special day. The affection I have received from the first day and the first round has been incredible, this has probably been the public and the atmosphere that I have experienced the most on a tennis court ", he sentenced addressing the stands in Spanish.

Later, before the microphone of Eurosport, Alcaraz reiterated that it was "a super special moment" and that he would "never" "forget" it, and acknowledged that his level was not the best in the first three sets. "I took the first one because I served quite well, I honestly think that Ruud had more options to win it because of his level because of his level from the back of the court", he pointed out.

"I was very dense in the first and second, but also in the third. In the end I managed to calm down a bit and play at a good level from the baseline because Casper was playing very well and he made it very hard for me. suffer there," he added.

Finally, about the last game, he confessed that he only thought "of throwing the ball up and serving well". "It hasn't been easy, more than mentally, with my legs. I was calm and I noticed that my legs were very heavy, so I knew I had to serve very well," he said.