Carlos Alcaraz: "It makes no sense to compare myself with the 'Big 3', I have to follow my path"

"We still haven't assimilated what has happened, I haven't stopped to think about what I've done and what needs to be improved for the future". 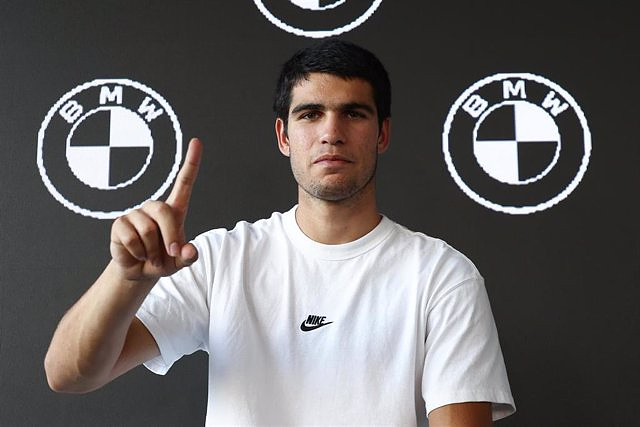 "We still haven't assimilated what has happened, I haven't stopped to think about what I've done and what needs to be improved for the future"

The Spanish tennis player Carlos Alcaraz stressed this Monday that "it makes no sense" to compare himself at this time with the so-called 'Big 3', the group made up of Rafa Nadal, Novak Djokovic and Roger Federer, and that he must follow his "path", marked for the need to continue "evolving" in his game after reaping his first 'Grand Slam' and number one at the US Open, something that he has not yet "assimilated".

"It has not been a pressure for me to think that I am achieving things or that they are better than those of the 'Big 3' when they were 19 years old. I enjoy playing tennis and thanks to that when I really play well and the results come, "he said Alcaraz after an act with BMW, one of his sponsors.

The one from El Palmar recalled that he brings out "a smile when things go wrong" and now he does not pay "much attention" to these comparisons. "They have been playing for 20 years and have won everything, it makes no sense (to compare myself), I have to continue on my way," he warned.

And this route happens because "you always have to improve day after day". "You have to improve yourself and there I do compare myself with the 'Big 3'. They have always looked for ways to be better and we have to evolve because today's tennis is not going to be the same as tomorrow's", indicated the Murcian.

"I want to improve in everything, nobody is perfect and you will never be. You can't get stuck in anything and you have to be ambitious, there are many tennis players who are working just like you to try to improve yourself. You have to keep working", added Alcaraz .

Now, as number one in the world, he has noticed that he has improved "in confidence". "I noticed a lot of confidence this week in Davis in myself, I was very sure of my shots. My rivals used to see me as the young man who shot up and could have the pressure of not wanting to lose and they played a little worse, but now I they see like one that is up there and they enter without pressure. I think that being behind motivates them and I think that against me they play quite well", he underlined.

The Spanish tennis player reiterated that he always dreamed "of being number one in the world and winning 'big'". "Now it's time to continue dreaming, winning 'Grand Slams', tournaments, being among the best for as long as possible and number one for as many weeks as possible," he stressed.

In this sense, he celebrated having Juan Carlos Ferrero by his side, who already experienced this situation in 2003. "It is very important to me, he has lived through everything I am experiencing and it is easier for him to give me advice and also super important," he said. .

"We still haven't assimilated what has happened, I haven't stopped to think about what I've done and what needs to be improved for the future, we have to keep working to stay there for as long as possible, but, of course, we're going to try to beat Juan Carlos (in weeks as number one)," he added with a smile.

The Spaniard now plans to play in Astana, Basel, the Masters 1,000 in Paris and the ATP and Davis Cup Finals. He ruled out being in the Laver Cup this week, despite the fact that he "was talked about and thought about", but finally "sporting reasons" and "thinking about the future" weighed on.

This will deprive him of being able to meet one of his idols, the Swiss Roger Federer, who last week announced his retirement after this team competition. "He is pure talent, class, elegance. He has also lasted so long because of how he plays and moves, it seems that he is not required. I read the other day that he has not retired in any game and I already did in one last year", highlighted.

"It is a gift that they have brought to us sports fans and I am proud to have seen him and to learn from him, he is one of my idols and I hope I can last as long as he does. I am satisfied with a quarter of what he has won It won't be possible (playing with Federer), but better than leaving with a loss", he remarked with a smile.

Federer and Nadal marked an era with their confrontations and Alcaraz believes that he will have something similar with the Italian Jannik Sinner, with whom he expects "a very nice rivalry". "Our games are worth watching, we've already shown it. There are going to be great games, in great stadiums and with great moments. Like Rafa and Roger, I think Jannik and I are going to have that rivalry," he predicted.

The world number one insisted that he has worked "hard day after day" and that "putting one hundred percent" has prepared him "for those moments" that he is living on the track and in his career. "It's hard to maintain demand all year round, but I have to take advantage of my youth. I've always wanted to be with those people I've seen as a child and it doesn't mean any sacrifice for me," warned an Alcaraz who carries "quite well and normally" his popularity . "I like to know that many people support me, that gives me peace of mind," he stressed.

For the man from Murcia, "it's incredible" to have reached some of his "goals" "so soon", and he made it clear that they are advising him that everything is the result of "a path from long ago" and that he be "humble". "My team and my family tell me not to upload the results, to know where I come from, that is the best advice they have given me," explained the tennis player, who knows that "first you have to be a person and then an athlete" and that he wants people to see him "as a good person with values".

Alcaraz did not forget his parents, who "are always there pick and stick" and who are the ones who "have sacrificed the most" for him. "I have made them lose many plans," pointed out the US Open champion who sees himself as "a very simple boy", whose "best plan" outside of tennis is to meet his friends.

"Tennis is my life and I love to play, most of the days it is not an effort, and in those that you do not feel like it is when you have to give it more desire and attitude because they add up to twice as much. When you get saturated it helps a lot to disconnect from tennis", continued the one from El Palmar who is already "eager to get home" to be able to "enjoy" with his family and friends more calmly. "I want to see everyone in my town to thank them for loving me so much," he said.