Carlos Alcaraz: "I'm not afraid of this moment, I've prepared myself to live it" 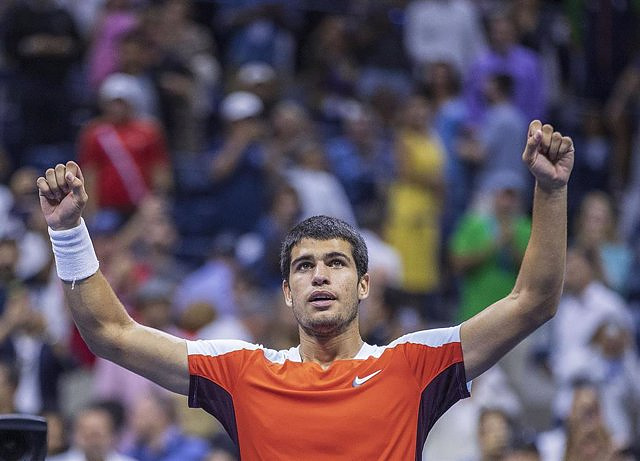 The Spanish tennis player Carlos Alcaraz, who sealed his ticket to the US Open final this morning after beating the American Frances Tiafoe (6-7(6), 6-3, 6-1, 6-7, 6-3), has recognized that "he is not" "afraid of this moment", and that his entire career has been "prepared to live it", and has explained that, despite also having the opportunity to ascend to number one in the world if he beats the Norwegian Casper Ruud, he'll just try to "enjoy the moment."

"Right now, I am not afraid of this moment. I have prepared myself mentally and physically and in every possible way to be able to live that moment, to fight for great things. But now it is time to recover, enjoy, and tomorrow will be the day key to prepare mentally for Sunday," he declared at a press conference.

Now, the Murcian will have the opportunity to climb to number one, as his coach, Juan Carlos Ferrero, achieved after being a finalist at the 2003 US Open, where he lost to local Andy Roddick. "We've talked about it. In 2003 he beat -Andre- Agassi in the semis to become number one. He told me about preparing for that match. I'm going to do the same to go for it. It doesn't matter what I'm fighting for. : I'm just going for it and enjoying the moment," he said.

"Today it has been shown that after the matches with Cilic and Sinner, I am physically prepared to be able to play good tennis despite all the hours I have been on court and regular rest. That is why I am not afraid of the final after qualifying like this. I'm just going for it," said Alcaraz, the first player with 50 wins this year.

Regarding the match against Tiafoe, he acknowledged that the 'match point' that he let slip in the fourth set "was a difficult moment". "But I knew I had to stay calm and believe in myself," he stressed. "Some of those points help me to come up, to smile, enjoy the moment. The truth: sometimes you have to get a little magic, right?" He joked.

Now, he will face a Casper Ruud whom he has already beaten in his two previous clashes, in Marbella 2021 and Miami 2022. "He has already played a 'Grand Slam' final, and for me it will be everything new. But also everything new I've dealt with it in a good way in my career, and I hope to do the same on Sunday. I feel capable of beating him again in a 'Grand Slam.' version," he concluded.