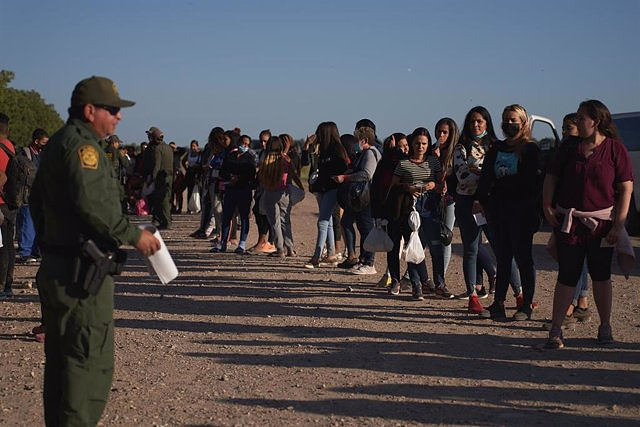 A flight with migrants from the US city of San Antonio, in Texas, has been canceled before embarking on a journey to the airport in the town of Georgetown, in the state of Delaware, near the summer residence of the US president, Joe Biden .

This has been confirmed by the chief of the Police of Béxar --in Texas--, Javier Salazar, who has detailed that in the morning they had received a notice about a flight full of migrants that has finally been postponed, as he has declared to the chain CNN.

"We had news this morning that a flight was going to arrive in San Antonio and LEAVE with a plane full of migrants to Delaware (...) but I understand that, at the last minute, we received word that the flight was postponed," Salazar has expressed.

The spokeswoman for the Delaware Department of Health and Human Services, Jill Fredel, has confirmed that at this time there are no reports of migrants arriving unannounced, although she has indicated that the state is preparing "just in case."

Preparations began after flight tracking websites showed a flight plan filed with a commercial scheduler overnight Monday involving one of the charter planes used on the flights to Martha Vineyard Island, according to has picked up the said chain.

The flight was scheduled to depart from San Antonio, make a brief stop in Crestview, Florida, and then depart for Georgetown, Delaware, near the summer residence of US President Joe Biden.

Earlier, Republican Governors Ron DeSantis of Florida and Greg Abbot of Texas sent two planes and two buses carrying migrants to the island of Martha's Vineyard and to the Washington DC residence of US Vice President Kamala Harris, respectively.

Asked if he was aware of the possible arrival of migrants at the Georgtown airport, Jean-Pierre has detailed that he did know the information and that he had not received it from the governor of Florida, criticizing him for little collaboration, as he said at a press conference.

Given this, the White House spokeswoman has called for both the Republican Party and the Democratic Party to reach an agreement to solve the problems of immigration in the country, something that she has described as "a broken system".

In addition, he has advanced that the Biden Administration is in close collaboration with state officials and local service providers who "are prepared to welcome these families in an orderly manner while they follow their asylum applications."

The president of the United States, Joe Biden, accused Republican governors last week of using migrants as part of their political maneuvers, acts that he has described as "un-American" and "reckless."

"The Republicans are playing politics with human beings, using them as 'props'. What they are doing is simply wrong, it is anti-American, it is reckless," said the US president during the Congressional Hispanic Caucus Institute Gala, according to a White House statement.