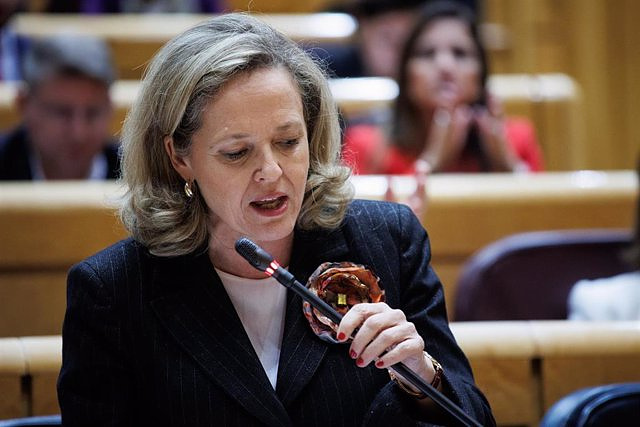 The First Vice President and Minister of the Economy, Nadia Calviño, reminded the PP this Wednesday that they went with José María Aznar in Moncloa when they agreed to transfer the authority for Traffic to Navarra and assured that with this change "the presence of the Civil Guard, but "even" is going to "reinforce".

Calviño has stated that he is struck by the fact that the 'populares' attack the Government when the transfer of Traffic authority to the Foral Community "was agreed upon by Aznar in the year 2000, it was the PP that agreed to it".

In an interview on Antena 3, collected by Europa Press, the first vice president also pointed out that with this transfer "the presence of the Civil Guard in Navarra is not reduced".

"All the people who are currently carrying out Traffic functions are guaranteed that they can continue to carry out other functions, that is, that they will even possibly strengthen the presence of the GC in Navarra", he indicated.

Calviño has claimed that in Spain there is no reason to be "constantly" transmitting the feeling that any change in the "decentralized structure of powers" means "weakening" a "strong country". "How little confidence," he pointed out.

Yesterday, the President of the Government valued the agreement reached with EH Bildu during the negotiation for the Budgets so that the Traffic competence is transferred to Navarra before March 31st. From the Senate, Sánchez also apologized for the "speed" of certain transfers to the Foral Community.

Asked about the repeal of the crime of sedition that is being debated this week in Congress after the proposal by PSOE and Unidas Podemos, Calviño has indicated that this reform of the Criminal Code is "separate" from the negotiation of the Budgets for 2023, to the Even that he has charged with the PP and Junts for being, in his opinion, "against the possibility of improving coexistence" in Catalonia.

He has stated that both PP and Junts, the parties that governed when the "train crash" of 2017 occurred, seem to "want" to redirect the situation to a "dead end", and added that the Sánchez Executive "does not want to go back."

‹ ›
Keywords:
Guardia CivilAznarPPNadia Calviño
Your comment has been forwarded to the administrator for approval.×
Warning! Will constitute a criminal offense, illegal, threatening, offensive, insulting and swearing, derogatory, defamatory, vulgar, pornographic, indecent, personality rights, damaging or similar nature in the nature of all kinds of financial content, legal, criminal and administrative responsibility for the content of the sender member / members are belong.
Related News