Calviño charges against the fiscal model of the PP: "Low taxes on the rich and impoverish public services" 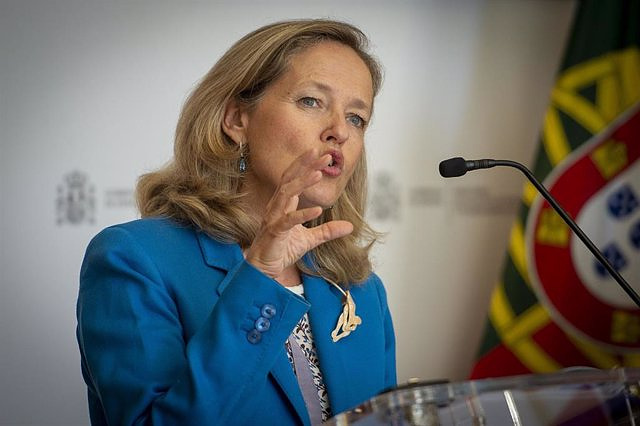 The first vice president and minister of Economic Affairs and Digital Transformation, Nadia Calviño, has charged against the taxation model of the Popular Party that is already being implemented in some of the communities in which it governs and that is based, in her opinion, on lowering the taxes on the rich and "in a race to the bottom that impoverishes everyone".

"There are those who are embarking on an absolutely destructive downward race that begins with the elimination of taxes on large fortunes," warned the first vice president in statements to the media after meeting with the Portuguese Economy Minister, Antonio Costa Silva, in Madrid.

The vice president has criticized that the PP, at a time when public services need to be reinforced, has announced as a "star measure" the elimination of the Wealth tax that taxes large fortunes.

"Two autonomous communities [Madrid and Andalusia] have embarked on a downward competition meant to eliminate taxes on large fortunes," the vice president stressed.

And it is that just this week, the president of the Junta de Andalucía, Juanma Moreno, announced the abolition of the wealth tax in the autonomous community --as is already happening in Madrid-- and a new reduction in the Income Tax of the Individuals (IRPF).

Calviño has acknowledged that, at first, he thought it was "a bad joke", since the economic context marked by the challenge of inflation requires support for the most vulnerable and the reinforcement of public services. "I couldn't believe it," admitted the vice president.

Faced with this, Calviño recalled that the Government of Spain has tried to advance in a fiscal framework at a global and European level so that, precisely, "this type of race to the bottom" would be prevented.

"Just when at a global level and at a European level we are moving towards greater harmonization and towards a reinforcement of our public system, the Popular Party once again isolates itself with respect to the popular parties of the rest of Europe with an approach that goes in the direction of impoverish our welfare state and our society", criticized the Minister of Economy.

In addition, the vice-president regretted the PP's vote against "all the measures that were in favor of families" and the taxes on those productive sectors that are making extraordinary profits as a result of the increase in energy prices and interest rates --energy and banking--.

‹ ›
Keywords:
PPNueva EconomíaNadia Calviño
Your comment has been forwarded to the administrator for approval.×
Warning! Will constitute a criminal offense, illegal, threatening, offensive, insulting and swearing, derogatory, defamatory, vulgar, pornographic, indecent, personality rights, damaging or similar nature in the nature of all kinds of financial content, legal, criminal and administrative responsibility for the content of the sender member / members are belong.
Related News