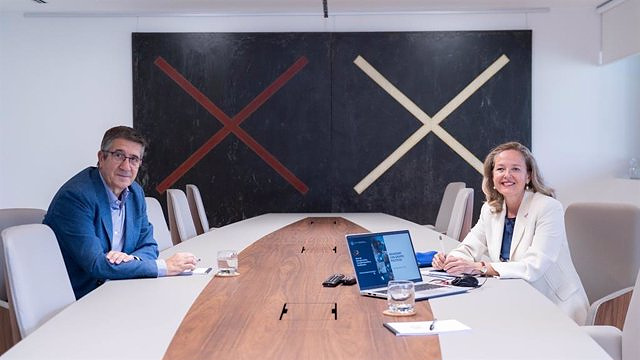 The Vice President of Economic Affairs and Digital Transformation, Nadia Calviño, began this Monday with the PSOE the round of contacts with the parliamentary groups to prepare the addendum to the Recovery Plan, the second part of this plan to request up to 70,000 million euros in loans.

Specifically, the first meeting was with the spokesperson for the PSOE, Patxi López, and in the next few days he will meet with the spokespersons for the parliamentary groups in order to receive their proposals for this addendum, which the Government must present soon to the European Commission .

This document will include the reforms and investments that will be financed from the loans of the 'Next Generation EU' mechanism that correspond to Spain, as well as the definitive allocation of transfers to Spain and the additional transfers of the REPowerEU regulation project.

To prepare it, the first vice president sent a letter last September to the presidents of the autonomous communities and cities inviting them to propose strategic projects until September 15 and identify sectoral priorities to be financed with these funds.

The head of Economic Affairs will also have the opportunity to talk with the groups this week in Congress, since she plans to appear this Wednesday in the Lower House to present the annual report of the AMCESFI (Macroprudential Authority Financial Stability Council) and report on the economic situation of the country.

‹ ›
Keywords:
PSOECongreso De Los DiputadosNadia Calviño
Your comment has been forwarded to the administrator for approval.×
Warning! Will constitute a criminal offense, illegal, threatening, offensive, insulting and swearing, derogatory, defamatory, vulgar, pornographic, indecent, personality rights, damaging or similar nature in the nature of all kinds of financial content, legal, criminal and administrative responsibility for the content of the sender member / members are belong.
Related News