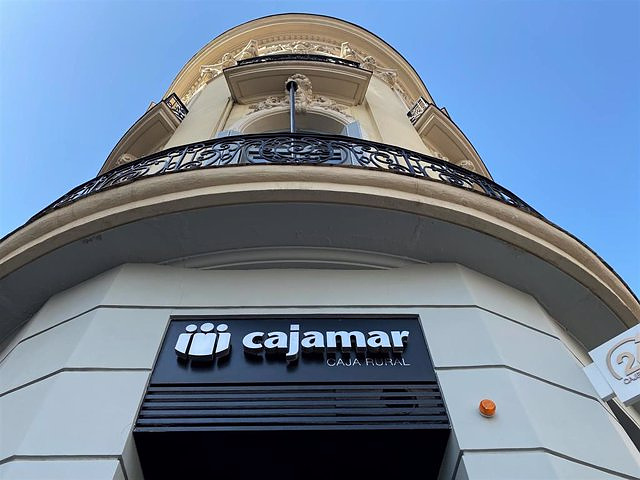 Grupo Cajamar obtained a consolidated net profit of 50.1 million euros in the first half of the year, which is 12.3% less than the same period of the previous year, due to "the reinforcement made during this year in provisions and write-downs of foreclosed assets and other financial assets amounting to 238 million euros".

The entity has indicated that the quality of assets has improved with the decrease in irregular assets, which reflects a decrease of 359 million in doubtful assets, 24.3% less compared to the same period of the previous year, and of foreclosed assets net by 364 million euros, 34.8% lower than that registered in the second quarter of 2021.

The gross margin stood at 593 million euros up to June, thanks to the boost from commissions, which increased by 23.4% compared to June 2021, mainly due to disintermediation operations -insurance, investment funds, plans of pensions and consumption--, which increased by 30.9%.

The entity has indicated that the recent rise in interest rates agreed by the European Central Bank (ECB) suggests a favorable outlook for income from banking activity in the coming quarters. Operating expenses, for their part, registered an increase of 2%.

The entity has added that total assets registered an increase of 10.5% year-on-year to 62,292 million euros, while the total volume of managed business reached 97,044 million euros.

In addition, Cajamar has maintained that the current economic situation has led retail managed resources to increase by 3,952 million euros, 9.1% year-on-year, to 47,188 million euros, mainly due to the increase in sight deposits by 14.6%.

Off-balance sheet funds, mainly mutual funds, rose by 5.4%, despite the poor performance of the markets in the first half of the year. Healthy customer loans grew by 6.4%, to 35,075 million euros.

The coverage of the different components of irregular assets was also reinforced: the non-performing loan coverage rate stood at 74.5% at the end of the semester, and the coverage rate of foreclosed assets, at 64.8%, once the haircuts produced in the adjudication process have been incorporated.

The group closed June with 1.6 million members and 3.6 million customers, who are served by 5,264 professionals in 868 offices and 158 agencies.

The 'loan to deposits' (LTD) ratio stood at 83.8%, with an improvement of 2.7 percentage points compared to the end of the second quarter of the previous year.

Likewise, Grupo Cajamar has available liquid assets of 13,382 million euros, and has a capacity to issue mortgage bonds of 4,075 million euros, which meets the limits required by the European Banking Authority. The liquidity coverage ratio (LCR) stood at 189.2% and the net stable funding ratio (NSFR) at 132.8%.

Likewise, the entity has established a framework of sustainable bonds under which it plans to issue social, green and/or sustainable bonds as an effective instrument to channel investments aimed at promoting sustainable development and the fight against social exclusion.

‹ ›
Keywords:
CajamarSector Financiero
Your comment has been forwarded to the administrator for approval.×
Warning! Will constitute a criminal offense, illegal, threatening, offensive, insulting and swearing, derogatory, defamatory, vulgar, pornographic, indecent, personality rights, damaging or similar nature in the nature of all kinds of financial content, legal, criminal and administrative responsibility for the content of the sender member / members are belong.
Related News