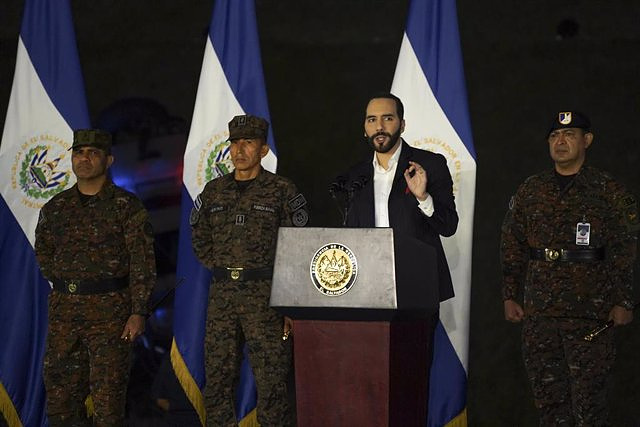 The president of El Salvador, Nayib Bukele, this Saturday accused international organizations, several NGOs and members of the opposition as guilty of gangs "evolving" into a "guerrilla" in the country.

"It is clear that the gangs are trying to evolve into a guerrilla, since it is impossible for them to confront our agents and our troops in urban areas," he said on his personal Twitter account.

"This 'evolution' is done under the auspices of international organizations, NGOs and the opposition, who give them legal, media, political and financial coverage," added the president, detailing that the arrests of gang members have increased in clandestine camps .

However, Bukele has explained that his government is confronting these camps, because every day the work of the National Civil Police and the Armed Forces of El Salvador "are dismantling three to four" places where the gangs keep weapons, drugs and money. Likewise, he has assured that the intervention teams have dismantled "more than 100 camps in recent weeks."

The president has accused gang members of opening fire on police members the moment they find the camps. "In all of them there is weapons, drugs, money, communication equipment, extortion documents," Bukele has maintained.

The Salvadoran governor assured on June 1, on the anniversary of the third year of his term, that he was "about to win the war against the gangs." He also stressed that his government "is not a dictatorship" and specified that the murders of gang members during confrontations with the Security Forces would not be taken into account.

These statements arose as a result of constant accusations by international organizations of non-compliance in the defense of Human Rights.

Amnesty International denounced at the beginning of June that Bukele has plunged the country into a rights crisis where massive violations of International Law, arbitrary arrests, torture and ill-treatment are committed, as well as the murder of about twenty people under the tutelage of the Condition.