The Commissioner for Justice, Didier Reynders, hopes to be able to "bring closer" positions between the Government and the Popular Party to unblock the renewal of the General Council of the Judiciary (CGPJ) during his visit to Spain on September 29 and 30, a trip during the one that will be seen with ministers, the opposition and associations of judges to insist on the urgency of renewing the governing body of the judges and reforming the system for their appointment. 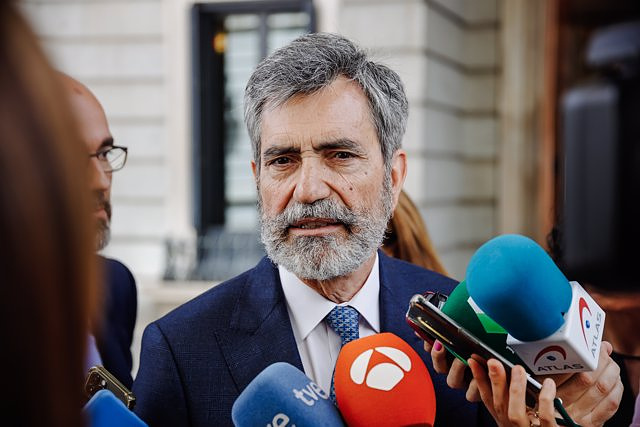 The Commissioner for Justice, Didier Reynders, hopes to be able to "bring closer" positions between the Government and the Popular Party to unblock the renewal of the General Council of the Judiciary (CGPJ) during his visit to Spain on September 29 and 30, a trip during the one that will be seen with ministers, the opposition and associations of judges to insist on the urgency of renewing the governing body of the judges and reforming the system for their appointment.

"We can also get involved in the dialogue, not only ask for a dialogue (between the political forces) but try to bring them closer. We have already done it and I will try to do it on this visit," the commissioner told reporters in Brussels, upon his arrival to the Council of European Ministers for General Affairs.

In this way, the Belgian politician has referred to the "double role" that the Community Executive can play in the face of the blockade in the CGPJ, not only insisting on the recommendations of the last report on the rule of law in which Brussels underlined the urgency of the situation , but also mediating between the parties to "organize a dialogue".

"We are trying to organize a dialogue between political forces because the change of the CGPJ needs majorities such that it requires collaboration between the main political forces," Reynders reasoned, for whom it is urgent that the new appointments "be launched" as the need to tackle "very quickly" the reform of the system.

In any case, the Commissioner for Justice wanted to make it clear that the situation in Spain "is not at all" comparable to the situation in other Member States in which, as has happened with Poland, Brussels has initiated more severe procedures after verifying a "regression" in its democratic system.

"In Spain (*) what we are trying to do is improve the existing situation, it is not the same procedure at all", Reynders said when asked about the possibility of initiating a disciplinary proceeding or activating article 7 of the Treaties as he has already done the Community Executive against Poland for the systemic risks to the rule of law in that country.

Thus, the former Belgian deputy prime minister has argued that Spain "is not accused of any new legislation that went in the wrong direction", but rather points out that there are regulations "that have not been in accordance for a long time" with European standards .

In its recommendations to Spain, Brussels endorses the criteria of the Council of Europe --an institution outside the EU-- by which the appointment of members in the governing bodies of judges must be made by their peers to prevent them from being object of politicization.

In this context, the European Commission expects Spain to follow the recommendations of its July report and assume as a "priority" the renewal of the CGPJ to undertake "immediately after" the reform of the election system, although Brussels gives itself until next annual evaluation to see if the authorities follow such recommendations.

Only in the event that the situation "for years did not improve", the commissioner concluded, the Community Executive "would have to think of other instruments" to put pressure on Spain.

In the absence of closing his two-day agenda in Madrid, Reynders plans to meet with several members of the Government, including the Minister of Justice, Pilar Llop, and the Minister of the Presidency, Félix Bolaños, and with the President of the Supreme Court and the General Council of the Judiciary, Carlos Lesmes, according to sources from the government and the CGPJ.

In addition to this issue, the commissioner has on his agenda addressing with the authorities the use of 'Pegasus' espionage software, a program allegedly used to spy on independence leaders and the Prime Minister, Pedro Sánchez, and whose use in different Member States one has been created

‹ ›
Keywords:
BruselasPPCGPJ
Your comment has been forwarded to the administrator for approval.×
Warning! Will constitute a criminal offense, illegal, threatening, offensive, insulting and swearing, derogatory, defamatory, vulgar, pornographic, indecent, personality rights, damaging or similar nature in the nature of all kinds of financial content, legal, criminal and administrative responsibility for the content of the sender member / members are belong.
Related News